Looking for something else in an old newspaper, I came across a small obituary for Ralph Alpher. Alpher died August 12, 2007, in Austin, Texas, at the home of his son, Dr. Victor S. Alpher. 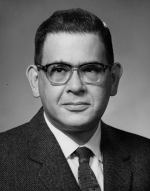 Ralph Alpher gave us the Big Bang. We let him slip away, almost unnoticed. Odds are you don’t recall ever hearing of Alpher. Here’s your mnemonic: The alphabet paper.

In 1948, as a graduate student under George Gamow at the George Washington University, Alpher and Robert Herman of Johns Hopkins laid the groundwork for what would become Big Bang theory, calculating how matter could arise in the Universe. Gamow, exhibiting the sense of humor for which physicists are famous, listed the authors of the paper as Alpher, Bethe, Gamow and Herman — a play on the Greek alphabet’s first three letters (alpha, beta, gamma), and a joke invoking the name of the great physicist Hans Bethe. Bethe liked the joke, consulted on the paper, and the theory of Big Bang was published.

The name “Big Bang” was applied a few years later; Sir Frederick Hoyle and his colleagues favored a “steady state” universe, and at the time both hypotheses could accurately predict most of what was observed, and neither could be disproven. Hoyle, hoping to poke ridicule at the competing hypothesis, belittled it as “a big bang.” The name stuck. The name misleads the unwary; the theory posits a rapid expansion at the beginning of the universe and time, but not an explosion, per se.

Alpher wrote the mathematical model; the model predicted Big Bang, and specifically, it predicted the cosmic background radiation that would have been left over; it was this background radiation, the “echo” of Big Bang, that Arno Penzias and Robert Wilson stumbled across in 1965. Robert H. Dicke had invested several years in trying to discover this signature, and had to explain to Penzias and Wilson what they had found. Penzias and Wilson won the Nobel Prize for their discovery; Dicke, Alpher, Herman and Gamow, did not get Nobel Prizes. This is generally regarded as one of the great miscarriages of justice in Nobel Prize awards, not that Penzias and Wilson did not deserve an award, but that the chief theorists and the man who unveiled the discovery were overlooked.

This is another story of rejection leading to great discovery; it is also a rather sad story of a momentous achievement, mostly overlooked through the years.

Alpher was the son of Jewish émigrés from the Russian pogroms. His high school achievements merited a scholarship to the Massachusetts Institute of Technology, in 1937. MIT had a rule at the time that scholarship recipients could not work outside the school. Alpher assisted his father in building houses in the Washington, D.C. area; the family had little money, and Alpher would be unable to pay room and board without working. Discussions with MIT broke down — the offer of a scholarship was withdrawn, according to most accounts when MIT discovered he was a Jew. As so many great people of the post World War II era, he enrolled at the George Washington University.

At GWU, Alpher found Gamow as a mentor, and much of the rest is history.

The paper reported Dr. Alpher’s calculations on how, as the initial universe cooled, the remaining particles combined to form all the chemical elements in the world. This elemental radiation and matter he dubbed ylem, for the Greek term defining the chaos out of which the world was born.

The research also offered an explanation for the varying abundances of the known elements. It yielded the estimate that there should be 10 atoms of hydrogen for every one atom of helium in the universe, as astronomers have observed.

Months later, Dr. Alpher collaborated with Robert Herman of the Applied Physics Laboratory at Johns Hopkins University on a paper predicting that the explosive moment of creation would have released radiation that should still be echoing through space as radio waves. Astronomers, perhaps thinking it impossible to detect any residual radiation or still doubting the Big Bang theory, did not bother to search.

The Alpher-Bethe-Gamow paper, or αβγ paper, as explained by the American Institute of Physics:

When Alpher and Gamow prepared a paper on the subject, Gamow mischievously added the name of the noted nuclear physicist Hans Bethe to the list of authors so it would be called the “Alpher-Bethe-Gamow paper,” mimicking the “alpha-beta-gamma” of the first letters of the Greek alphabet. Unknown to Gamow, Bethe was a reviewer for the journal to which Gamow submitted the article. Bethe took it in good humor, later explaining, “I felt at the time that it was rather a nice joke, and that the paper had a chance of being correct, so that I did not mind my name being added to it.” Gamow also urged Herman to change his name to Delter to match delta, the next letter in the Greek alphabet. Despite Herman’s refusal, in a paper in a major scientific journal Gamow referred to “the neutron-capture theory…developed by Alpher, Bethe, Gamow and Delter.” Not least among his notable characteristics was his sense of humor.

Alpher continued in this work for a time, but joined General Electric’s labs in the 1950s. When he retired from GE, in 1986 he joined the faculty at Union College in Schenectady, New York, and taught there until 2004.

Alpher was largely overlooked for awards even while his theory was big news in astronomy and physics for the last 40 years of the 20th century. I regret that I was wholly unaware he was in Austin; how many other great contributors to science and history live among us, unrecognized, uncelebrated, and their stories unrecorded?

Photo caption from AIP: A 1949 composite picture with Robert Herman on the left, Ralph Alpher on the right, and George Gamow in the center, as the genie coming out of the bottle of “Ylem,” the initial cosmic mixture of protons, neutrons, and electrons from which the elements supposedly were formed. [The Cointreau bottle from which the three drank a toast upon the acceptance of the paper, is now in the collection of the Smithsonian Institution.]

Alpher was an Eagle Scout. I wonder whether anyone has a history of his time in Scouting?

While the Nobel Prize eluded Alpher, he collected a host of other prestigious awards and honors. Earlier this year, President Bush announced that Alpher had been awarded the National Medal of Science, which is administered by the National Science Foundation and is the highest honor for science.

“For his unprecedented work in the areas of nucleosynthesis, for the prediction that universe expansion leaves behind background radiation, and for providing the model for the Big Bang theory.”

Gamow’s humor again on display — an undated note from Gamow upon the confirmation of the Big Bang, with a punny reference to Steady State backer Sir Frederick Hoyle. Image from the American Institute for Physics.

Help others hear the echo:

This entry was posted on Thursday, September 20th, 2007 at 3:35 am and is filed under Astronomy, Big Bang, Biography, Boy Scouts of America, Eagle Scout, Heroes, History, Physics, Science. You can follow any responses to this entry through the RSS 2.0 feed. You can leave a response, or trackback from your own site.