Best burger in the nation

Sophia Dembling wrote about it in today’s Dallas Morning News:  The Owl Burger, from the Owl Café — this one in San Antonio, New Mexico.

It’s the best burger in the world, I think.  It reminds me, and it’s a painful memory.

Back in better younger days, before I’d left American Airlines, Kathryn and I made one last run to Salt Lake City to retrieve the last of the stuff in storage.  It was a motley combination of stuff, mostly hers, that we couldn’t fit into our apartments on Capitol Hill in Washington, and then that we just didn’t need during law school.  The monthly storage bill finally got to be a burr after we’d settled in Dallas, and we had room for the stuff in the house.

We gave the kids a vacation with Grandma and Grandpa, flew to Salt Lake, rented a much-too-large truck (the smaller one we reserved wasn’t in), loaded up and headed out.

A drive from Salt Lake to Dallas can be dull as dishwater, but we worked to add some spice.  “Adventure in Moving,” the old U-Haul slogan ran — and one usually works to avoid such adventures at all costs.  But this was different.  This was planned adventure.  We took the Xtreme Scenic Route™, through Southwestern landscapes that squeeze the creationism out of the most fundamentalist Christians.

The first night we camped in Torrey, Utah, at the edge of Capitol Reef National Park.  Someone recommended a local Mexican restaurant in an old farmhouse, a place that was really top notch, as demonstrated by the autographed photo in thanks from Robert Redford behind the cash register.  Redford knows almost all of the great places to eat, and stop and look, in Utah and much of the Four Corners area (ask me about Redford and Dick Cavett in Farmington, New Mexico, sometime).  Great dinner in a great place.

(Can I remember the name of the restaurant more than 20 years later?  Not at all.  I could drive to it . . . if it’s still there.  Perhaps this is its successor.  If so, it’s gotten a lot fancier, and to me, less charming.  You don’t expect such fine dining in such a small town.)

Coyotes started to howl about 2:00 a.m.  We hadn’t bothered to pitch a tent, the weather being what it almost always is in Utah in the summer.  I don’t know how long I sat up, looked at the stars and listened to the coyotes all around the canyon, next to Kathryn as she slept.  It was one of those nights you remember for the rest of your life.

Capitol Reef N.P. demands more than one night’s stay — we had both been there before, though, and our task was moving furniture.   From Torrey we drove through Capitol Reef and on to the Moqui Dugway, about an 1,100-foot drop down off the Mogollon Rim, on the way to Monument Valley.

Remember, this was a big truck.  It was over 20 feet long, but just how much over I don’t remember.  I do remember that when we stopped at the overlook at the top, some guy on a Harley came over to ask if we were going to “try to drive down,” and when we said yes, he said he was betting we would make it, and he had some good money riding on it.  He wished us luck.

A note in the visitor center at Natural Bridges National Monument explains, now:

The Mokee Dugway is located on Utah Route 261 just north of Mexican Hat, UT. It was constructed in 1958 by Texas Zinc, a mining company, to transport uranium ore from the “Happy Jack” mine in Fry Canyon, UT. to the processing mill in Mexican Hat. The three miles of unpaved, but well graded, switchbacks descend 1100 feet from the top of Cedar Mesa (on which you are now standing). The State of Utah recommends that only vehicles less than 28 feet in length and 10,000 pounds in weight attempt to negotiate this steep (10% grade), narrow and winding road.

Here’s the Moqui Dugway (or Moki, depending on how much paint the sign maker has):

The Moqui Dugway — no place for too-big trucks, or trailers – photo from Craig Holl at Midwestroads.com

We waited until there was no traffic coming from the bottom for several miles, and started down.  About six switchbacks down we encountered a long, crew-cabbed duelly pickup towing about a 30-foot cabin cruiser boat.  Fortunately we found a wide spot so he could get by, though it took him what seemed like a half-hour to make one turn in the road, and I swear he had wheels spinning in air at one point.

If the motorcycleman did indeed wager on us, he won.

We camped again at the Monument Valley Tribal Park, on the Navajo Nation.  The Mittens dominated the skyline; I remember the frustration at being unable to capture the beauty of the place through the lens of a 35-mm SLR on any film.  Images could not be big enough, exposures could not do justice to the color and natural beauty of the place.  In some SUVs and RVs in the campground, people retired to watch television in their vehicles.  They were probably the same ones who pulled out at 6:00 a.m., unable to wait to watch the sunrise complete its glorious stretch across the desert.

The third day we planned to stop and see my widowed Aunt Fay in Farmington, New Mexico.  For a couple of years in college I had the pleasure of doing air pollution research in and around Farmington after the Four Corners Power Plant was in operation, and before the San Juan Power Station came on line.   Uncle Harry Stewart, my mother’s brother, lived there and worked with El Paso Natural Gas.  Weekends I spent with Harry and Fay and their friends the Woodburys.  Harry died a few years earlier — I hadn’t seen Fay in 15 years at least.

But first, I got us stuck in the sand about 50 miles west of Farmington.  We pulled off the road to check the map — off the road meant “into the sand,” though it looked firm from the highway.  Tow trucks were 80 miles away.  A passing woman drove me 40 miles to the home of a Navajo Tribal Policeman, and back; by the time we got back a passing couple from Tucson, Arizona, and a couple of local guys with shovels had dug away feet of sand to hard soil and stone; we gunned it out of the barrow and onto the road.  (How it works today, with cell phones and satellite phones — I hope it works better.)

We had a nice visit with Aunt Fay. 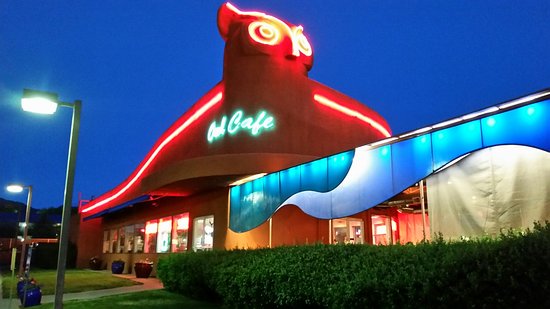 There is no way to avoid scenery between Farmington and Albuquerque.  We pulled into the intersection of Interstates 25 and 40 in Albuquerque near 8:00 p.m., found a hotel, and were happy to find a decent-looking café nearby, with an odd, 50-foot owl at one end.  The Owl Cafe.

Who possibly could have guessed?

We seemed to be among the last people there.  It was not crowded.  I probably had a beer.  And I ordered a burger.  “Owl burger?” the waitress asked.  “Made from owls?” I asked back.

She explained it had a touch of a green chile sauce on it.  Sounded good.

I mean, WOW!  It’s made from sirloin — moist and tender, not overcooked.  The bun is fresh, heavy and yeasty.  And I think it was the green chile stuff — heaven!  I told Kathryn I thought it might be the best burger anywhere.

And if I’ve eaten one Big H from Hires Drive-in in Salt Lake City, I’ve had a hundred (and would like a hundred more).  I used to argue that the Big H was the El Supremo of burgers.

The Owl Burger topped them all.

When I finished the Owl Burger, I ordered apple pie, and I wondered out loud if I should just have another burger instead.

In the morning, we found the place open for breakfast.  I joked about having another Owl Burger for breakfast — and it was on the menu.  But I didn’t.  I had some great egg dish.

Before we got out of Albuquerque, I regretted not having another Owl Burger.  All day long as we drove to Dallas I thought about that burger I didn’t have.

I’ve thought about that burger now for the better part of two decades.  The closest I’ve come to the Owl Café is a couple of passes through Albuquerque’s airport on the way to other places.

I opened the paper this morning, and there was that burger!

Owl Burger, from the Owl Cafe in San Antonio, New Mexico (photo from ABQStyle.com — not from the online DMN)

Alas, according to Dembling in the DMN, management of the Albuquerque Owl Café differs now from the San Antonio Owl Café — can the burger recipes be the same?  Do we now have to make the drive to San Antonio (New Mexico)?

The San Antonio site has some history related to development of the atomic bomb and the nearby Trinity bomb site.  One could study history, and have an historic burger at the same time.  I’ve wondered:  If the Germans had had Owl Burgers, would they have gotten the A-bomb first?  It’s that good.

[I did get excited three years ago to read that another Owl was open in San Antonio, Texas — but reading the article, I discerned that the author was unaware of a San Antonio in the Land of Enchantment.  Geographical error, gustatory disappointment.  If any of my students are reading this, that’s why you have to know geography — so you don’t drive to San Antonio, Texas, and find yourself 542 miles off target (thanks to Geobytes for the distance calculation).]

This entry was posted on Sunday, September 6th, 2009 at 5:45 pm and is filed under Family, Food history, Geography - Physical, History, Travel. You can follow any responses to this entry through the RSS 2.0 feed. You can leave a response, or trackback from your own site.

8 Responses to Best burger in the nation