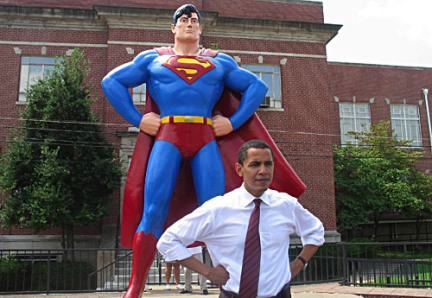 This photo will set off most sufferers of Obama Derangement Syndrome — who can’t stand Superman’s duplicating Obama’s stance. Can’t find details on this photo — I believe it was taken in Metropolis, Illinois, in 2008.

In my post drafts I have a longish one on various forms of crazy that, well, make me crazy.  It includes a lot of illogical things that populate the internet and political discussions like dysentery in a poorly-run refugee camp on the border of two third world nations at war with each other.

But it’s still hanging fire.  Plus, my description of the various anti-Obama crazinesses isn’t so cogent as our friend Jim provided in comments to an earlier post.

So, for your edification, and in the hopes that some sufferers of Obama Derangement Syndrome (ODS) may seek help on their own, or that you may be able to persuade them to seek help, here’s what Mr. Stanley wrote about it (all links added by me, here):

As with any mental illness, Obama Derangement Syndrome’s treatment must begin with an accurate diagnosis. It is certainly possible that what passes for ODS may actually be nothing more complicated than food poisoning. Got ahold of some bad clams? It will pass. It could be severe constipation. Nothing an enema can’t clear up. But if you’ve ruled out the usual suspects, follow this handy checklist to determine if you are an ODS sufferer. Remember, admitting you have a problem is the first step toward lucidity and wellness.

You may have Obama Derangement Syndrome…

If any of these resonate with you as plausible, reasonable or outright true, seek help for ODS immediately. There is no shortage of treatment options. One might begin by cancelling subscriptions to Stormfront, Newsmax, Citizen Magazine, World Net Daily, Conservapedia and World Magazine. Additional recommendations include a Fox “News” fast, putting your “Left Behind” books in the recycle bin and avoiding those personalities who may function as enablers of ODS. Such individuals include Glenn Beck, James Dobson, Rush Limbaugh, Tom Sowell, Laura Ingraham, Texe Marrs, Hal Lindsey, Sean Hannity, Bill O’Reilly, Michelle Malkin, Ann Coulter, Allen West and Rick “Man on Dog” Santorum. (This is, of course, not an exhaustive list.)

Side effects resulting from successful ODS treatment may include increased lucidity, rationality, compassion and diminished feelings of inadequacy and self-loathing. People who have recovered from ODS report a significant reduction in suspicion and mistrust of those of different races, religions and cultures. Ask your mental health professional if receiving ODS treatment is right for you.

Mr. Stanley got through that entire list without mentioning  Kenya, Bill Ayers, or the Illinois Bar disciplinary procedures.

You may be suffering from Obama Derangement Syndrome, if the symptoms listed above describe you.

There’s hope for you, if you are a sufferer. ObamaCare covers treatment.

Obama Derangement Syndrome may be a lot more prevalent that he thinks!

This entry was posted on Sunday, March 24th, 2013 at 1:06 am and is filed under History, Humor, Politics, Rampant stupidity, Reality. You can follow any responses to this entry through the RSS 2.0 feed. You can leave a response, or trackback from your own site.