Some background:  The newly-formed World Health Organization (WHO) estimated worldwide malaria deaths at more than 5 million per year, when it kicked off the ambitious but ultimately unsuccessful malaria eradication program in 1955.  Eradication hopes hung on the use of DDT, sprayed on the walls of homes in affected areas (Indoor Residual Spraying, or IRS), to temporarily knock down mosquito populations so that humans infected with malaria could be cured.  After early successes in temperate zones, malaria fighters took the fight to tropical Africa in 1963.  There they discovered that overuse and abuse of DDT had already bred mosquitoes resistant to the pesticide.  With no substitute for DDT available, WHO wound down the campaign on the ground by 1965, and officially abandoned it in 1969.

Nations who had pledged money for the fight early, cut back when DDT failed.  In 1963, about 4 million people died from malaria, worldwide.

Despite the lack of an international, worldwide fight against malaria, malaria fighters soldiered on.  Better housing and better medicines made gains.  By the time the U.S. banned DDT use on crops in 1972, pledging all U.S. production of DDT to fight disease elsewhere, annual malaria deaths had fallen to just over 2 million per year. By 1990, the annual death toll was cut to about a million per year.  Through the 1980s, malaria parasites themselves developed resistance to the main pharmaceuticals used to cure humans.

By the end of the 1990s, international agencies and especially NGOs like the Bill and Melinda Gates Foundation brought new funding and new urgency to the fight against malaria.  Expansion of production of artemisinin-based pharmaceuticals provided a new tool for health workers.  Funding from the U.S., through the President’s Malaria Initiative, helped a lot.  In 2000, about a million people died from malaria.  By 2014, malaria deaths fell to under 600,000.

Parasite resistance to the new pharmaceuticals poses a new threat to continued progress.  Funding is still far short of what experts estimate to be needed, and short of pledges from developed nations.  Mosquitoes that carry malaria parasites from human to human (after a step of the life cycle in infected mosquitoes) quickly evolve resistance to pesticides; malaria parasites develop resistance to pharmaceuticals used to treat humans.  Funding to rotate pesticides and drugs falls short, causing improper use of both, and quicker evolution of resistance in mosquitoes, and parasites. 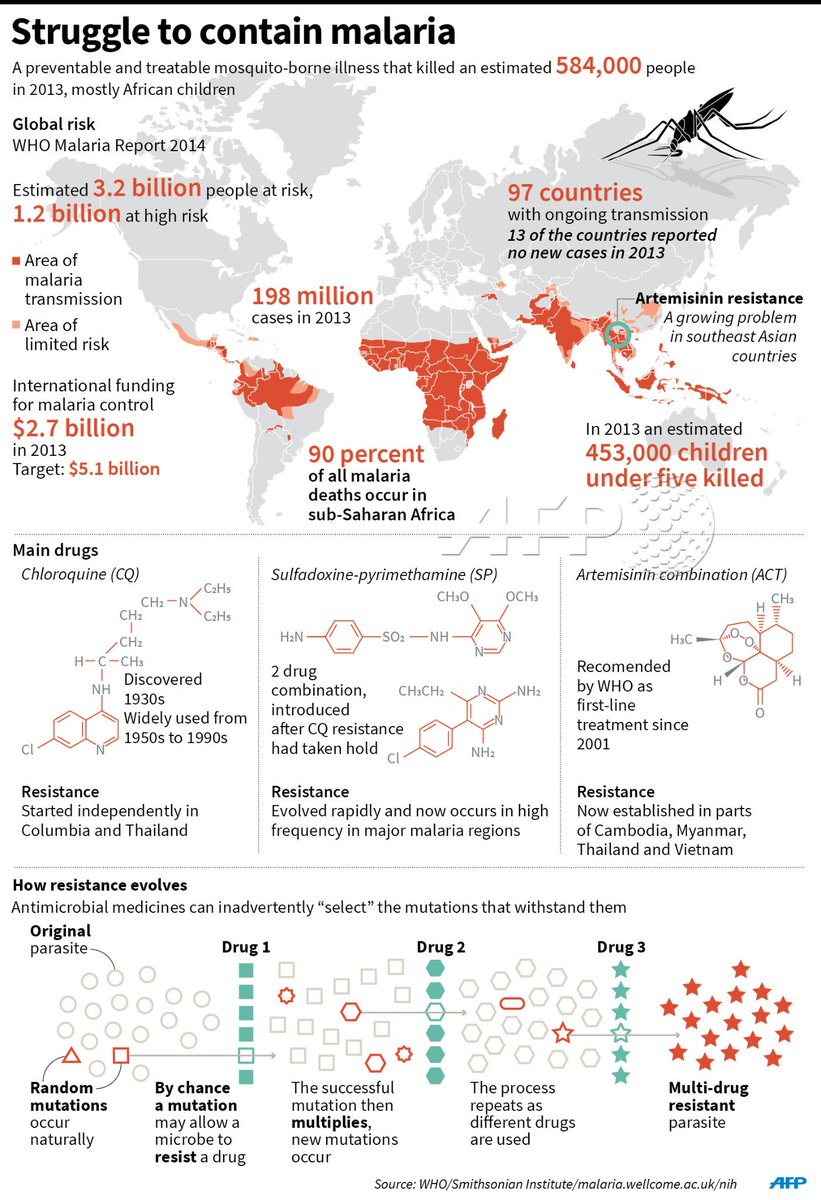 Infgraphic from Agence France Presse, on the fight against malaria, February 2015.

This entry was posted on Friday, February 20th, 2015 at 2:56 am and is filed under DDT, Evolution, Health care, Malaria, Public health, Science. You can follow any responses to this entry through the RSS 2.0 feed. You can leave a response, or trackback from your own site.