June 1, 2016: Fly your flags today in Kentucky and Tennessee for Statehood Day

Our laws on respecting and flying Old Glory encourage citizens to fly U.S. flags on specific dates, and on the date of statehood of the state in which a citizen lives.

Fly your flags today in Kentucky and Tennessee — or wherever Kentuckians or Tennesseeans may be — in honor of statehood. 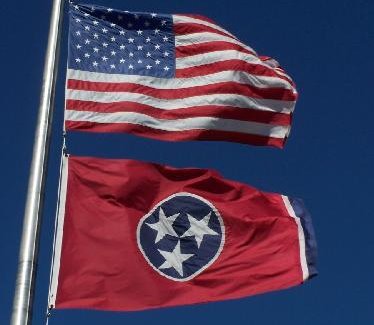 U.S. and Tennessee flags flying together on one staff. Photo by J. Stephen Conn

Kentucky’s state flag features a Native American and European colonist standing together, and the state motto, “United We Stand, Divided We Fall.” Photo by Gage Skidmore

Kentucky’s admission to the union pushed the U.S. flag to 15 stars and 15 stripes.   President George Washington signed the law that authorized the U.S. flag be expanded to 15 stripes in early 1794.  I’ve not pinned down the history of what happened next.  So far as I know there was no law expanding the flag to 16 stripes, and in 1818, Congress said the flag would be 13 stripes, with stars equal to the number of states (the law specified no specific pattern for the stars).

A 15-striped Star-spangled Banner that flew over Fort McHenry in Baltimore Harbor in 1814 and inspired Francis Scott Key to write the poem that is now the lyric to our national anthem.  President James Monroe signed the 13-stripe law four years later, in 1818.

What happened in between?  I suspect there are a lot of 15-stripe flags, but it wouldn’t surprise me to find a 16-stripe flag somewhere.  A variety of stars-and-stripes flags cropped up, which the 1818 law was intended to squelch.

Residents of the Bluegrass State and the Volunteer State should fly their flags today, in honor of their state’s having joined the union on June 1.

#OTD In 1792 Kentucky was granted statehood. This map in the #NKU archives was created by John Filson in1793. pic.twitter.com/chQHT1pkwn

A page from our archives on June 1, 1896 as Tennessee celebrated its 100th year of statehood https://t.co/I37sqLlRtV pic.twitter.com/PAzQgBL6Wo

Mark your calendar for Kentucky Statehood day on June 1 5:30-8:30 at @BossShepherds #KYsocietyDC

Yes, this is mostly an encore post. Fighting ignorance requires patience. And repetition.

This entry was posted on Wednesday, June 1st, 2016 at 11:24 am and is filed under Flag etiquette, Fly your flag today, History, Statehood, War of 1812. You can follow any responses to this entry through the RSS 2.0 feed. You can leave a response, or trackback from your own site.

One Response to June 1, 2016: Fly your flags today in Kentucky and Tennessee for Statehood Day