Issues you haven’t heard discussed in the campaign, 1: Clinton, on fair taxes 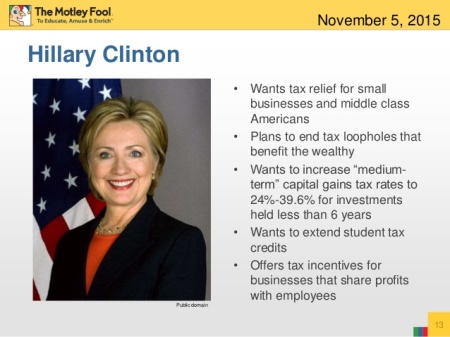 Slide from the Motley Fool on Clinton’s tax plan; slide is from 2015, Clinton’s position isn’t changed much. She knows what needs to be done.

With an assist from Warren Buffet.

This is wholly purloined from the campaign website for Hillary Clinton (unless otherwise noted), just to try to get a little discussion going on the real issues of the campaign.

Millard Fillmore’s Bathtub may do an entire series on issues not yet discussed, less than a week before the vote. Consider it public service, in the spirit of Fillmore, who remained ever conversant in public affairs and anxious to take a role to push for policies to improve America, as he saw it — and who, supported by his wives, founded the White House Library, the Buffalo and Erie County Historical Society, and the University of Buffalo (now SUNY-Buffalo) to further knowledge.

It’s outrageous that multi-millionaires and billionaires are allowed to play by a different set of rules than hardworking families, especially when it comes to paying their fair share of taxes.

Hillary Clinton believes that we need an economy that works for everyone, not just those at the top. But when it comes to taxes, too often the wealthiest and the largest corporations are playing by a different set of rules than hardworking families.

Hillary is committed to restoring basic fairness in our tax code and ensuring that the wealthiest Americans and large corporations pay their fair share, while providing tax relief to working families. That’s not only fair, it’s good for economic growth, because she will use the proceeds to create good-paying jobs here in America—and make bold investments that leave our economy more competitive over the long run.

As president, Hillary will:

More, not from Clinton’s campaign:

This entry was posted on Thursday, November 3rd, 2016 at 2:12 pm and is filed under 2016 Elections, Campaigns, Hillary Clinton, Taxes. You can follow any responses to this entry through the RSS 2.0 feed. You can leave a response, or trackback from your own site.

13 Responses to Issues you haven’t heard discussed in the campaign, 1: Clinton, on fair taxes