You can find this at the website of Texas Citizens for Science. Or, you can find it buried on page 47, in with all the other testimony at the Texas Education Agency’s (TEA) website, in .pdf form.

Or you can just read it here:

Before the State Board of Education Textbook Hearings

My name is Ed Darrell. I represent myself and my family today. We have two kids in the Duncanville, Texas, schools, both of them science nuts.

I am a lawyer. I paid much of my way through undergraduate school working as a botanist in air pollution research. For much of a decade I staffed the U.S. Senate Labor and Human Resources Committee, which deals with education issues; subsequent to my service on Capitol Hill I was for a brief, wonderful time Director of Information Services at the U.S. Department of Education’s Office of Educational Research and Improvement (OERI), during the late Reagan administration; my tenure there included responsibility for the redesign of the ERIC Library system, and I had responsibility for the Education Library which includes the largest collection of historic textbooks in the U.S.

My interest in these new books is to make certain that evolution by natural and sexual selection is covered well. Evolution is one of the great concepts of western civilization. Our children need to know what it is, accurately, and how it is thought to work, accurately, in order to function in school and the world.

For much of the past 30 years I have monitored biology textbooks, both in official and unofficial capacities. I have reviewed the books proposed for acceptance before you now, and read a few of them rather deeply. Generally, these textbooks are all acceptable in terms of the material they cover. Specifically, some of these books are outstanding. The photos and illustrations are vastly improved in the past 20 years. Publishers are recruiting top-notch authors – Kenneth Miller is one of the nation’s better biology instructors, and Peter Raven, in addition to being perhaps the world’s best botanist, is a past winner of a MacArthur Foundation grant. I have had the pleasure of working with Gilbert Grosvenor and the people at the National Geographic Society, and their participation in one of these texts is quite obvious in the improvements seen in the texts.

All that said, I think that, generally, evolution needs better coverage even than it gets in these books. There are simple, four- or five-step explanations for evolution by natural selection, especially as developed by Ernst Mayr. The Glencoe book lists the four-step version, but only as captions to illustrations. It should be incorporated better into the text. None of the texts is particularly outstanding as I would like them to be about the history and biography of the people in biology. Darwin’s great genius, and his great good nature which endeared him to all who knew him, is barely on display. Science is rarely done by dull men in white lab coats, in reality, and it would be nice to know more about some of the people who do the work. One text features interviews with scientists – including Peter and Rosemary Grant of Princeton, the two who have recorded evolution in real time, and Paul Sereno of the University of Chicago, the great dinosaur hunter whose use of technology to make great finds will make him legendary. This is great stuff, and there needs to be more of it.

Those criticisms are beyond the scope of the review you are allowed under the law, however. These might be classed as errors by omission, and I hope the publishers, authors and editors can find a way to fix the problems in the future.

So let me direct my most serious comments to you and this process. I suspect that most of you did not get a great education in Darwinian theory before you graduated high school, and you may have missed it in college, too. That’s the story of most Americans. The great biologist G. G. Simpson wrote an article for a journal in 1959, at the centennial of Darwin’s most famous work, titled “One Hundred Years Without Evolution is Enough.” 44 years later, it’s even more true. Especially for Texas kids, we cannot afford to give them less than the best education anymore. Knowledge of evolution is important the health and economic well-being of our state.

Randolph Nesse at the University of Michigan [moved to University of Arizona, by 2018] has been making the case for 15 years now that evolution knowledge is essential in health care. Evolution theory aids in understanding infectious disease, not only in the development of antibiotic resistance, but also in the understanding of increases and decreases in virulence of pathogens. Defenses against infection, such as fever and immune responses, are now understood as products of an evolutionary arms race. Sexual reproduction, and all its inherent problems, is also evolutionarily informed. Genetic diseases are inherently evolution based. Evolution even informs research in diseases like atherosclerosis and myopia, which are thought to be the result of the mismatch between our environment today, and the environment in which our species evolved. This is essential knowledge for all health workers, in the treatment and prevention of HIV/AIDS, and common ear infections.

Texas’s economy is based on evolution in large part. The Rio Grande Valley is home of the best grapefruit grown on Earth. Grapefruit, of course, is a new species that did not exist just over a century ago. The Rio Reds that are currently the largest cash crop in Texas grapefruit are the result of a sport mutation in grapefruit a half-century ago, and specifically the result of an intense, evolution-based breeding program by Texas A&M University.

In a different vein, there is hope today that the cotton boll weevil will be eliminated from the United States in the near future, a result of careful eradication programs, based on evolutionary theory. The imported fire ant, on the other hand, still does about $1.2 billion of damage to Texas every year. Because of evolution in the species since it hit U.S. shores in the 1930s, any hope to slow or stop the spread of this nasty pest rests in an understanding of evolutionary mechanisms. The multi-queen, mega-colonies of fire ants clearly demonstrate how misunderstanding evolution can make our pests more virulent.

We should also note that the Texas oil, gas and coal extraction industries are based on a companion science, geology, which will most likely be attacked here today. Biology textbooks mention geology because that science gives us good information on the ages of fossils, formerly living things which clearly demonstrate evolution. Geology is critical to the Texas economy, and attacks on geology should not be considered acceptable.

3. Evolution is necessary for student achievement

The Advanced Placement biology examination our high school kids take is 29% based on evolution, according to the College Board. Evolution is the linking framework in all biology, and we should not be surprised. The model curriculum laid out by Education Secretary Bill Bennett in 1987 included evolution as one of the key concepts kids need to know. That is true today more than ever.

You will hear today, I predict, that there are competing ideas to evolution which should be added to the texts. I urge you to leave such intramural fights to the scientists, and to the very formal processes science has to settle such fights. Curriculum writers base their curricula on what is in the science journals, not on hopeful assertions that have not been proven in the laboratory or in the field. Our kids need to get the best information, and we should not dither on that point at all.

Finally, I want to note that you will be urged to make changes to make evolution more palatable to some religious sects. That is not in the scope of the law that brings us here today, and I would caution you that any dilution of the information our kids get, will have consequences later on. It may be that there is some error in Darwinian theory. But that error will not be found by a kid who does not have a firm understanding of what Darwinian theory is.

Evolution today protects our health and feeds our people. It is impossible to walk down the produce aisle of any supermarket and fail to see the real results of evolution and its benefits. From corn, to broccoli, to grapefruit, to Canola oil, from genetic disease to insulin treatments for diabetes, evolution theory applied in the real world makes our lives better. Let us make sure our kids know that. 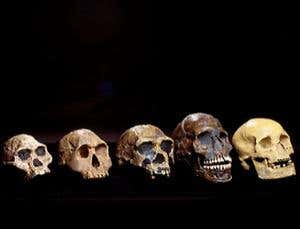 Added in 2013, for indexing purposes from NewScientist.com: Five skulls belonging to some ancestors and relatives of modern humans. From left to right, the skulls are: Australopithecus africanus (3-1.8 mya); Homo habilis (or H. rudolfensis, 2.1-1.6 mya); Homo erectus (or H. ergaster, 1.8-0.3 mya, although the ergaster classification is generally recognised to mean the earlier part of this period); a modern human (Homo sapiens sapiens) from the Qafzeh site in Israel, which is around 92,000 years old; and a French Cro-Magnon human from around 22,000 years ago (Image: Pascal Goetcheluck / SPL)

Other testimony in TEA sources on textbook selection:

Commenters on several threads asked for information about evolution. These are a few of the excellent sites available that explain evolution:

155 Responses to Why study evolution?