Coming up on World Malaria Day 2014, and U.S. Congressional elections, we’ll start seeing repeated false attacks on Rachel Carson as the right’s most-favored representative of environmentalism, and those attacks will include calls to “end the ban” on DDT to roll back the “increase in malaria caused by the ban. ” Facts are that DDT was never banned in Asia nor Africa (not even under a 2001 anti-pollution treaty); Rachel Carson called for no ban on DDT, but instead urged use of “integrated pest management” (IPM)  to combat disease vectors, and IPM used broadly since 1999 has slashed malaria death totals and infections even more; and malaria deaths and infections started a downward trend in the 1960s that continues today, mostly without DDT.

This is one in an occasional series of posts to correct these hoax claims, with citations to information that readers may check for themselves. Much of this post appeared here earlier, in much longer form.

Rachel Carson was very careful in her 1962 book Silent Spring.  She offered more than 50 pages of citations to science papers and hard research to support what she wrote — a “don’t take my word for it, check it out for yourself” kind of honesty.

Still, today, there is an organized effort with broad success on the internet to smear Rachel Carson and hide the science she wrote about.  Standard from adherents to this insurgent anti-science movement include are claims that Carson’s book was wrong.  The title comes from a prologue of the book in which Carson described a spring in some future year, a spring which was unheralded by the songs and chatterings of birds.  Carson argued that, if humans do not stop to think about secondary effects of chemicals used, especially as pesticides, whole regions might be devoid of birds, dead from DDT poisoning.

Carson cited research from the U.S. Department of Agriculture and the U.S. Fish and Wildlife Service about just how deadly DDT could be to entire ecosystems.  She was particularly alarmed by research done at Midwestern universities, where DDT sprayed to save American elm trees from Dutch elm blight, quickly killed off most birds who came in contact with the stuff.  Dutch elm blight is spread by beetles, the targets of DDT in those sprayings.

In the 1950s, ornithologists, wildlife managers and bird watchers documented the pending demise of entire species of birds, especially raptors at the top of local food chains.  Audubon bird watchers throughout the eastern U.S. noted that migrations consisted of older birds only, with young and maturing birds appearing to have disappeared. Older birds mated, built nests, and laid eggs. Usually the eggs did not hatch, with chicks dying before the end of gestation.  In the few cases where young hatched, they generally died before they could migrate even one year.

Especially for the American bald eagle, this was a great disappointment. Eagles had been plentiful when European colonists migrated to North America, starting after Columbus’s voyages, 1492-1494.  By 1900, however, eagles had been hunted almost to extinction — well, they were extinct in some states.  Colonists, then farmers and ranchers, saw eagles as pests.  They ate fish the colonists wanted to catch for themselves.  Eagles would sometimes take a farmer’s chicken.  Cases of eagles taking larger prey are sparse to non-existent prior to the latter 20th century — but farmers claimed they did.  And so the birds were hunted mercilessly, simply to shoot them.

In 1911 the federal government tried to solve a many-states-wide problem, with a law protecting eagles from hunting.  It did little good.  In 1941 Congress passed a new law, with criminal penalties for people who poached eagles.  The decline of adult numbers slowed dramatically.  But that problem with hatching fledges stopped the recovery, at least so far as young birds who could replace those who died of old age or accidents.

Carson’s critics argue that eagles were never really in decline.  Steven Milloy and Gordon Edwards invented a fantastic tale that the Audubon Society annual Christmas Bird Count actually recorded an increase in eagle numbers, a false claim that Audubon certainly never made, based on a twisted misapplication of bird count methods.  USFWS and others noted the decline of eagles speeding up through the 1950s and 1960s.

Carson’s critics then will say that what plagued eagles was hunting and poaching, and not DDT.  While that was true prior to 1941, that was not the case after World War II when the laws were enforced well.

When studies indicated that DDT would stop birds from successfully breeding, Carson cited them. Her critics claim those studies were in error. 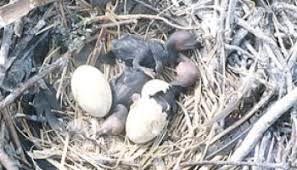 But they were not.  In fact, not a single study cited by Carson in Silent Spring has ever been refuted by later peer-reviewed research, nor pulled back for any reason.  A decade after Carson’s death, researchers discovered that residual DDT in birds, especially eagles and other raptors, prevented the females from forming competent shells on the eggs they laid.  Even when the DDT doses were not high enough to kill the chicks outright, the shells could not survive the mother’s sitting on them.  The shells broke, and the chicks inside died.

DDT was a scourge to the American bald eagle, the brown pelican, the peregrine falcon, and osprey — and probably many other birds.

Discover magazine carried an article about DDT and Carson’s book in November 2007.  Discover said that, since 1962 when Carson’s book was published, more than 1,000 peer-reviewed publications support Carson’s conclusions, a record remarkable in any branch of science.

In fact, Carson may have underestimated the impact of DDT on birds, says Michael Fry, an avian toxicologist and director of the American Bird Conservancy’s pesticides and birds program. She was not aware that DDT—or rather its metabolite, DDE—causes eggshell thinning because the data were not published until the late 1960s and early 1970s. It was eggshell thinning that devastated fish-eating birds and birds of prey, says Fry, and this effect is well documented in a report (pdf) on DDT published in 2002 by the Department of Health and Human Services’ Agency for Toxic Substances and Disease Registry (ATSDR). The report, which cites over 1,000 references, also describes how DDT and its breakdown products accumulate in the tissues of animals high up on terrestrial and aquatic food chains—a process that induced reproductive and neurological defects in birds and fish.

History also supports the scientists.  President John F. Kennedy tasked the President’s Science Advisory Council to check out Carson’s book, to see whether it was accurate, and whether the government should start down the path of careful study and careful regulation of pesticides as she suggested.  In May 1963 the PSAC reported back that Carson was dead right on every issue, except, maybe for one.  PSAC said Carson wasn’t alarmist enough, that immediate action against pesticides was justified, rather than waiting for later studies or delaying for any other reason. (The full text of the report may be obtained here.)

Carson’s science citations were verified by a select panel of the nation’s top biologists including entomologists, certified as scientifically accurate.   Since she published, more than 1,000 peer-reviewed studies have been performed that verify her findings on DDT’s harms to birds.

I have never found a contrary study published in any peer-review science journal, based on research.

This entry was posted on Sunday, April 6th, 2014 at 2:39 am and is filed under Bird Watching, DDT, History, Ornithology, Rachel Carson. You can follow any responses to this entry through the RSS 2.0 feed. You can leave a response, or trackback from your own site.