What were scientists saying about global warming in 1971?

I worked in air pollution studies way back then.  That’s not how I remember it at all.  I remember great, good-natured debates between Ph.Ds in the Department of Biology at the University of Utah, and other scientists from other institutions passing through and working in the field with us.  Greenhouse effect was very well understood even back then, and the discussions were on the nature of just how much human pollution would affect climate, and in which way. 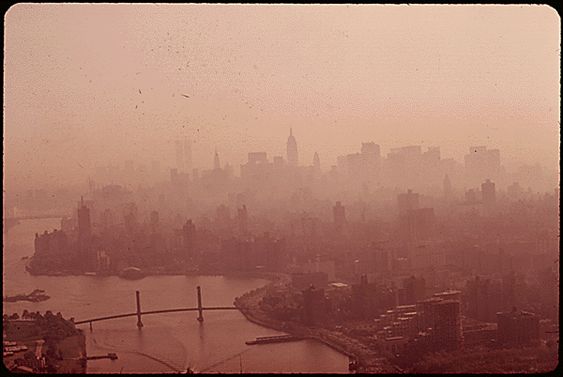 Looking for something else, I took off my shelf a book we used as a text in air pollution courses at the University of Utah in the 1970s, Whatever Happened to Fresh Air? by Michael Treshow.  Treshow taught at Utah.  He was deeply involved in several research projects on air pollution.  He was also a great conversationalist and competitive tennis player.  His book was a good text, but he intended it to be read by lay people, especially policy makers, also.  It’s easy to fathom, intentionally so.

Here, below, is what Treshow wrote in the early pages about carbon dioxide as an air pollutant, in sketching the global problems of air pollution.  Notice that, while he makes note of the predictions of what would happen with uncontrolled particulate and aerosol pollution, he gives the science straight up, telling what pollution can do, depending on local circumstances and global circumstances.  Treshow notes the research that the denialists cite now, but he explains enough of the science so that any reasonable person should be able to see that, if one form of pollution is controlled and another is not, the effects might be different.

Over the past several million years, the earth’s animal and plant life have reached a workable equilibrium in sharing this atmosphere and keeping the oxygen and carbon dioxide concentrations in balance.  But man, by burning fossil fuels (particularly coal) at an accelerated rate and by removing vegetation at the prodigious rate of 11 acres per second in the U.S., may be upsetting this equilibrium.  Many scientists believe this carbon dioxide build-up is one of the major threats to man’s environment.

Carbon dioxide (CO2) is occasionally regarded as an air pollutant for this reason, even though it is a natural and essential component of the atmosphere.  Certainly the present concentrations are not dangerous; but what would happen if the amount of carbon dioxide in the atmosphere should increase appreciably?  What hazards would be imposed?

An increase in carbon dioxide would benefit the green plants since they need it for photosynthesis.  But what effect would it have on man and animals?  Or on the physical environment?  The main hazard lies in the effect that carbon dioxide has in absorbing the infrared radiation which normally radiates from the earth back to the atmosphere.  If the carbon dioxide content of the lower atmosphere were to increase, it would prevent the infrared heat absorbed by the earth from the sun from reradiating into the atmosphere.  Heat energy would accumulate and cause a general increase in the earth’s temperature.  Such an increase in temperature, often called the “greenhouse effect,” could cause the ice caps to melt, raising the level of the oceans and flooding most of the world’s major cities.

It is awesome to realize that sea level is actually rising.  It is now 300 feet above what it was 18,000 years ago, and is reportedly rising nearly nine inches higher each century.  Beaches are being wasted away and tides lap ever closer to the steps of coastal homes.  But is the displacement of our beaches more closely related to increasing carbon dioxide concentrations or to the normal warming process between ice ages?

Not everyone agrees that carbon dioxide is to blame.  Concentrations vary greatly around the world.  Near urban areas, where fossil fuels are burned, concentrations are high; over forested areas, where plants are rapidly removing the gas, they are low.  Concentrations also vary with the height above the ground, the latitude, whether over the ocean or land and even with the time of day and season of the year.  All of these variables make it difficult to agree on a reasonable average carbon dioxide concentration.

Extensive measurements suggest that carbon dioxide concentrations near the earth’s surface have increased about 10 percent since 1900.  During this same time, fossil fuel consumption increased about 15 percent.  This is a remarkably, close, meaningful relationship.  The 5 percent difference is readily accounted for, since this much would be absorbed by the ocean or by rocks and living organisms, particularly plants, which absorb much of the surplus carbon dioxide.  In fact, green plants probably have the capacity to absorb and utilize far more carbon dioxide than man is likely to release.

This temperature drop has been thought to result from the increase in the amount of submicron sized particulates which remain suspended in the atmosphere. These aerosols obstruct the entrance of the sun’s heat and light rays, thereby disrupting the earth’s energy balance.  The effect is one of less heat and lower temperatures.  Dr. William E. Cobb of the National Oceanic and Atmospheric Agency predicts the possibility of another ice age.

What changed since then?  The Clean Air Act provided the legal drive to clean particulates and aerosols out of the air.  Alas, we did not then have good controls for greenhouse gases.  The success of the Clean Air Act, and similar laws worldwide, rather left the pollution field open for greenhouse gases.  Without pollution to offset the effects of GHG, warming became the stronger trend.

I think Treshow was quite prescient back then.  His work is still accurate, when we adjust for the events of history that came after he wrote the book.

Time Magazine cover for January 27, 1967, photo by Larry Lee. The photo shows a typical Los Angeles day at 3:30 p.m., with photochemical smog restricting visibility dramatically. Particulate pollution and sulfates added to the visibility problems, and made air pollution a greater health hazard. An accompanying story was titled, “Ecology: The Menace in the Skies.”

It’s popular among those opposed to the science of climate change to claim scientists don’t know what they’re talking about, because ‘back in the 1970s they predicted a new ice age, and they were wrong.’

Dr. Treshow’s book presents the state of the science of air pollution in the early 1970s. He didn’t “predict” an ice age. He noted that particulate pollution was a major problem, and that particulates and other pollution created a cooling effect that could offset and perhaps overpower the warming effects of CO2, as he discusses in the passage above. In lay terms, in a few brief passages, Treshow notes the conflicting results of different types of pollution.

Claiming scientists “predicted” an ice age tells only half the story, and thereby becomes a grossly misleading, whole lie.

This entry was posted on Thursday, November 3rd, 2011 at 11:34 am and is filed under air pollution, Carbon Dioxide, Climate change, climate_change, CO2, Global warming, History, Science. You can follow any responses to this entry through the RSS 2.0 feed. You can leave a response, or trackback from your own site.

77 Responses to What were scientists saying about global warming in 1971?