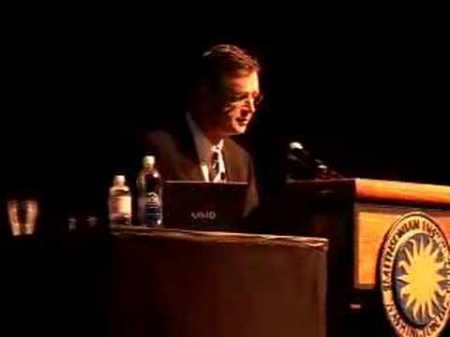 Author Michael Crichton railing against environmental protection and science he politically disagreed with, at the Smithsonian Institution, about the same time as his Commonwealth Club presentation.

One of my news grabbers found an article on environmentalism and religion at a Live Journal site, an answer to a speech by Michael Crichton on environmentalism as religion.  Crichton’s speech was delivered in 2003 to the Commonwealth Club in San Francisco, a venerable old institution for giving a soap box to doers and thinkers. [Note, April 2015: If that link doesn’t work, find Crichton’s speech here.]

Crichton’s speech started out with promise:

We must daily decide whether the threats we face are real, whether the solutions we are offered will do any good, whether the problems we’re told exist are in fact real problems, or non-problems. Every one of us has a sense of the world, and we all know that this sense is in part given to us by what other people and society tell us; in part generated by our emotional state, which we project outward; and in part by our genuine perceptions of reality. In short, our struggle to determine what is true is the struggle to decide which of our perceptions are genuine, and which are false because they are handed down, or sold to us, or generated by our own hopes and fears.

As an example of this challenge, I want to talk today about environmentalism.

The promise was short-lived.

Crichton described his learnings from studying anthropology, including an observation that religions always arise, and cannot be stamped out.  From there he makes an astounding leap, to claim that environmentalism is religion.  From that failed leap, the speech rapidly deteriorates.  He adopts tenets of American Christian and political fundamentalism, rapidly following up with a disavowal of fundamentalism, as if to try to hide what he’s done, or deny it, at least for himself:

So I can tell you some facts. I know you haven’t read any of what I am about to tell you in the newspaper, because newspapers literally don’t report them. I can tell you that DDT is not a carcinogen and did not cause birds to die and should never have been banned. I can tell you that the people who banned it knew that it wasn’t carcinogenic and banned it anyway. I can tell you that the DDT ban has caused the deaths of tens of millions of poor people, mostly children, whose deaths are directly attributable to a callous, technologically advanced western society that promoted the new cause of environmentalism by pushing a fantasy about a pesticide, and thus irrevocably harmed the third world. Banning DDT is one of the most disgraceful episodes in the twentieth century history of America. We knew better, and we did it anyway, and we let people around the world die and didn’t give a damn.

I can tell you that second hand smoke is not a health hazard to anyone and never was, and the EPA has always known it. I can tell you that the evidence for global warming is far weaker than its proponents would ever admit. I can tell you the percentage the US land area that is taken by urbanization, including cities and roads, is 5%. I can tell you that the Sahara desert is shrinking, and the total ice of Antarctica is increasing. I can tell you that a blue-ribbon panel in Science magazine concluded that there is no known technology that will enable us to halt the rise of carbon dioxide in the 21st century. Not wind, not solar, not even nuclear. The panel concluded a totally new technology-like nuclear fusion-was necessary, otherwise nothing could be done and in the meantime all efforts would be a waste of time. They said that when the UN IPCC reports stated alternative technologies existed that could control greenhouse gases, the UN was wrong.

I can, with a lot of time, give you the factual basis for these views, and I can cite the appropriate journal articles not in whacko magazines, but in the most prestigious science journals, such as Science and Nature. But such references probably won’t impact more than a handful of you, because the beliefs of a religion are not dependent on facts, but rather are matters of faith. Unshakeable belief.

From the promising start of claiming we must be skeptical and carefully sort out what is true from what is not true, he rapidly plunges from the stratosphere into the depths of the ocean of misinformation.  Count the errors:

Those are just the factual errors in two paragraphs.  Environmentalism as religion?  Maybe that would be a good idea, if the religion honored accuracy and truth telling, rather than fictional accounts of what is going on on Dear Old Planet Earth.

I enjoyed Michael Crichton’s writing, and I hope his stories inspire kids to work at a life in science.  But, as with Caesar, as Antony noted, the bad stuff people do lives on past them.  Let’s change that for Crichton – kill the bad stuff, keep the good stuff.

The evil that men do lives after them;
The good is oft interred with their bones.

Other sites that still get it wrong, five and six years later:

This entry was posted on Monday, November 24th, 2008 at 2:21 pm and is filed under Accuracy, DDT, Environmental protection, History, Junk science, Malaria, Politics, Science, Voodoo history, Voodoo science. You can follow any responses to this entry through the RSS 2.0 feed. You can leave a response, or trackback from your own site.

2 Responses to Good Interred With Their Bones Dept.: Michael Crichton