Thomas Sowell bolloxed it up at National Review Online:

Who blames Rachel Carson, an environmentalist icon, because her crusading writings against DDT led to the ban of this insecticide in countries around the world — followed by a resurgence of malaria that killed, and continues to kill, millions of people in tropical Third World countries? 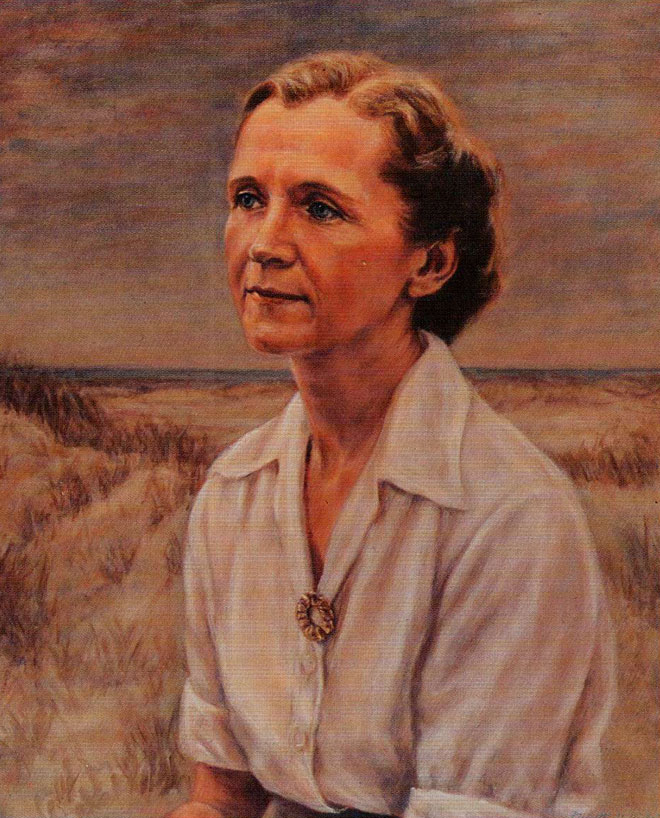 Rachel Carson Homestead painting of Ms. Carson: “Rachel Carson, a child of the Allegheny Valley, was a writer and an ecologist. There have been great writers whose descriptions of natural history and stories of the natural world charm and delight readers; and there have been scientists whose work excites the public attention. Rachel Carson rises to a heroic stature because her conscience called for action, not only words.” (Painting by Minette Bickel)

Only someone ignorant of malaria and DDT, or someone with a real political axe to grind.

Malaria did not “resurge” when DDT was banned on cotton crops in the U.S.  The U.S. ban did not extend to Africa, and DDT has never been banned in Africa nor most of Asia.

Malaria deaths have declined steadily over the past 50 years, generally as DDT use was reduced.  In 1959 and 1960, the peak years of DDT use, 4 million people died from malaria, worldwide.  WHO cut back on DDT use in 1965 when mosquitoes began showing serious resistance and immunity to the stuff, but by 1972, when the U.S. banned agricultural use of DDT (but continued exports), about 2 million people died annually from malaria.

Today, largely without DDT, malaria deaths are down to under 900,000 — a 75% reduction in deaths from peak DDT use.

So, there is no cause-effect relationship between Ms. Carson and the U.S. ban on DDT, nor between that ban and malaria deaths.  In fact, there are fewer malaria deaths now than when DDT was used irresponsibly.

Carson was right.  It’s a good thing wise people listened to her.

Who knows what comments see the light of day over there?

How many times will conservative commentators of all stripes abuse the DDT/Rachel Carson story before they start getting it right?  How much does that skew their views from the accurate and wise view?

This entry was posted on Monday, May 16th, 2011 at 4:14 pm and is filed under DDT, History, Law, medicine, Rachel Carson, Science. You can follow any responses to this entry through the RSS 2.0 feed. You can leave a response, or trackback from your own site.

10 Responses to Sowell wrong about DDT and Rachel Carson