This is mostly a reprise of a post from October, in which we noted that climate scientist James Hansen‘s off-handed prediction of what might be warming damage to New York had come true.  Not that Hansen wanted it to ever occur, but Hansen’s conjecture had been the subject of great ridicule attempts in the warming [choose one: denialists’, critics’, apologists’s] Gish Gallop rebuttal attempts.

As it is again.  This time, a discussant pointed the Anthony Watts’s Carnival of Misbelief as the source of a claim which, the discussant said, proved liberals don’t like facts.

Here’s the run-up question, and my response:

He should have quit at bafflegab.  His link runs to Anthony Watts’s place, with the same attempted ridicule of James Hansen’s nightmare.

Watts made the same error Steve Goddard made, of course.  Watts corrected one erroneous detail — the time in which Hansen said it might occur — but tried to make the ridicule stick:

As of this update in March 2011, we’re 23 years into his prediction of the West Side Highway being underwater. From what I can measure in Google Earth, Dr. Hansen would need at least a ten foot rise in forty years to make his prediction work. See this image below from Google Earth where I placed the pointe over the West Side Highway, near the famous landmark and museum, the USS Intrepid: 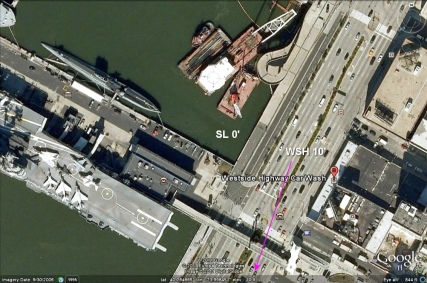 According to Google Earth, the West Side Highway is 10 feet above sea level here – click to enlarge

We turn to the events of last October, and the storm that was Hurricane Sandy, which slammed into New Jersey and New York, and that same West Side Highway.

I noted in an earlier post, on October 30 of last year:

Over at Rabbett Run:

tonylearns said…
Could someone go over to Goddard’s blog for me ( I have been banned three times most recently for having the gall to suggest he was wrong in ridiculing the possibility of a new record minimum SIE this year. ) and ask for his apology to Hansen for ridiculing the possibility of the West Side Highway being underwater. I just saw a video showing the West Side Highway underwater.
29/10/12 7:46 PM

No! Someone whose comments don’t show up at Steve Goddard’s blog? Must be some massive disruption in the force of the Tubes of the Interweb thingy.

What is this guy Tony on about?

At Steve Goddard’s blog — this is the same guy who said the western drought was over because Lake Powell rose a few feet, though the drought raged on everywhere else — Goddard and his flying and limping monkeys have been poking fun at something James Hansen is alleged to have said:

According to NASA’s top scientist, Manhattan has been underwater for the past four years, and is experiencing a horrific drought.

While doing research 12 or 13 years ago, I met Jim Hansen, the scientist who in 1988 predicted the greenhouse effect before Congress. I went over to the window with him and looked out on Broadway in New York City and said, “If what you’re saying about the greenhouse effect is true, is anything going to look different down there in 20 years?” He looked for a while and was quiet and didn’t say anything for a couple seconds. Then he said, “Well, there will be more traffic.” I, of course, didn’t think he heard the question right. Then he explained, “The West Side Highway [which runs along the Hudson River] will be under water. And there will be tape across the windows across the street because of high winds. And the same birds won’t be there. The trees in the median strip will change.” Then he said, “There will be more police cars.” Why? “Well, you know what happens to crime when the heat goes up.”

And so far, over the last 10 years, we’ve had 10 of the hottest years on record. [Quoting an article at Salon]

The West Side Highway under water?  Ha.

Goddard’s blog has used Hansen’s quote as a regular punchline, not noticing that Hansen said “in 20 to 30 years,” and assuming he was just awfully, comically wrong.  30 years from 1988 will be 2018.  This year is 2012, six years to go.  Goddard tried to ridicule Hansen a few times over the past couple of years, for example:

AP may complain about this use, but this is an academic, learning exercise:

Caption from Yahoo! News: This photo provided by Dylan Patrick shows flooding along the Westside Highway near the USS Intrepid as Sandy moves through the area Monday, Oct. 29, 2012 in New York. Much of New York was plunged into darkness Monday by a superstorm that overflowed the city’s historic waterfront, flooded the financial district and subway tunnels and cut power to nearly a million people. (AP Photo/Dylan Patrick) MANDATORY CREDIT: DYLAN PATRICK

Dylan Patrick got the photographic evidence that shows, once again, warming denialists really are a classless, fact-lacking bunch.  CNN has photos from Dylanphoto1 (the same guy, almost certainly), in a slide show, noting, “Most of the Westside Highway south of 49th street is flooded all the way down, and in front of the USS Intrepid.”  Across from Pier 88 and the USS Intrepid, the street is indeed underwater.

So we learn that, as a comedian, Steve Goddard has an extremely limited range and depends on a sympathetic room to get laughs; and as a climate scientist, he is even more limited, and wrong, with 6 years to go in the 20 to 30 year range James Hansen offered.  And we learn once again, sadly, that James Hansen was right back in 1988 when he hit the claxons to warn us of global warming.

23 times Goddard repeated the charge?  Do you get the idea that “climate skeptics” ran out of material years ago, and have been dancing a cover-up for a very, very long time?  Hurricane Sandy blew and floated his claim away.

In this reprise post, I add three photos to make it even more clear what happened:

From CNN: By dylanphoto1 | Posted October 29, 2012 | NYC, NY, New York — CNN PRODUCER NOTE dylanphoto1 told me, ‘It was fairly quiet with large gusts of wind and some rain. There were other people out and about taking photos and commenting on how crazy it is to see the water covering the highway. Cops were out chasing people off the highway.’

Yes, Dear Reader, that is indeed Pier 88.  New Yorkers probably recognize it as the berthing place of the U.S.S. Intrepid, the same ship Watts shows in his photo, while laughingly promising that the West Side Highway would never be flooded by the ocean at that spot.  Never?

CNN image, photo by dylanphoto1; in this view, Pier 88’s denizen, the U.S.S. Intrepid, can clearly be seen by the name on the stern of the ship.

One more photo from dylanphoto1:

At New York City’s Pier 88, the U.S.S. Intrepid, with the West Side Highway in the foreground, covered by surging and rising ocean waters.

So there you have it.  Some conservatives will deny the science they claim to cling to, blaming liberals or James Hansen for being right all along.

Is this stuff from the anti-warms the Cargo Cult Science Dr. Feynman warned us about, do you think?

Even more, a bit later:

This entry was posted on Wednesday, May 22nd, 2013 at 12:19 am and is filed under Climate change, climate_change, Global warming, History, NASA, Politics, Science. You can follow any responses to this entry through the RSS 2.0 feed. You can leave a response, or trackback from your own site.