Bednets enough enough to beat malaria in most places 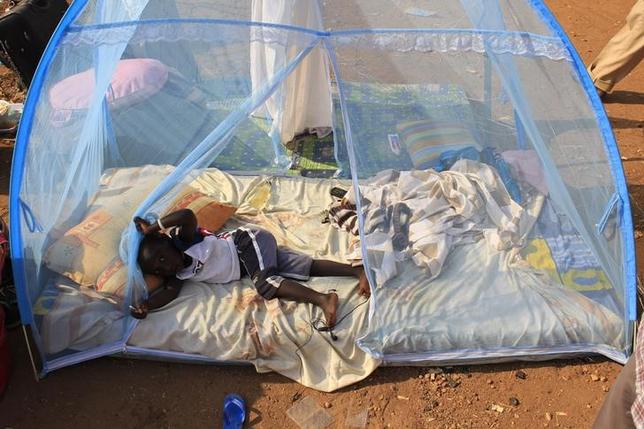 Reuters caption: A displaced child plays on a mattress under a mosquito net laid in the open at Tomping camp near South Sudan’s capital Juba January 7, 2014. Reuters/James Akena/Files

Another blow to the DDT partisans.

In a report published last January, which I just reread, researchers found that bednets alone offer enough prevention of malaria that Indoor Residual Spraying (IRS) using DDT or one of the other 11 WHO-approved insecticides, offers no additional protection, but at additional cost.

Spraying insecticides indoors offers children no additional protection from malaria when bed nets are used, a study said on Tuesday, as malaria cases and deaths worldwide continue to fall.

A study by medical journal The Lancet said donors should invest their limited resources on additional bed nets as the most cost-effective solution to tackling malaria, costing an average of $2.20 per person compared to $6.70 for insecticide.

“High bed net use is sufficient to protect people against malaria in areas that have low or moderate levels of malaria,” lead author Steve Lindsay said in a statement.

Malaria, a mosquito-borne parasitic disease, kills more than 600,000 people a year, and most victims are children under five living in the poorest parts of sub-Saharan Africa.

The study coincided with the launch of the World Health Organisation’s (WHO) annual World Malaria Report, which said the number of global malaria deaths fell by 47 percent between 2000 and 2013, with malaria cases also steadily declining, due to improved access to testing, treatment and bed nets. (http://in.reuters.com/article/2014/12/09/health-malaria-nets-idINKBN0JN0YT20141209)

But another report by June indicates that gains against malaria can still be tough to maintain, especially with global warming creeping up on us.

The fight’s not over.

This entry was posted on Thursday, October 8th, 2015 at 4:53 am and is filed under DDT, Malaria. You can follow any responses to this entry through the RSS 2.0 feed. You can leave a response, or trackback from your own site.