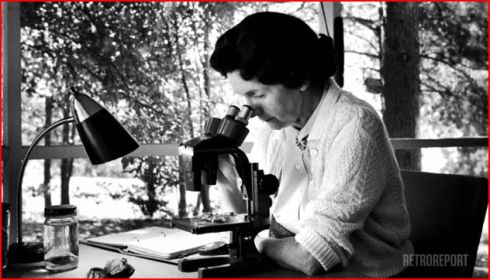 Rachel Carson at a microscope, American Experience/RetroReport image. Did Carson’s work cause an increase in malaria? Is she to blame for continued malaria deaths? No, answers a short film bonus to “Rachel Carson,” the 2017 PBS film.

A straight up, historic look at the question of Rachel Carson’s fault in stopping malaria.

Anti-environmentalists and corporate hoaxsters argue that Rachel Carson should be blamed for an imaginary increase in malaria deaths, after the U.S. banned DDT use on crops.

In conjunction with WGBH’s American Experience film on Carson released early in 2017, this short film focusing on malaria as a continuing plague puts to rest the idea that Carson should be blamed at all.

Soaking in the bathtub, we find the film not strident enough in defense of Carson; but for those strident nuts who claim Carson a murderer, it may have some good effect. And of course, you, intelligent dear reader, will be persuaded more gently.

Where malaria is the question, DDT is not the answer. Where malaria still exists, it’s not Rachel Carson’s fault.

This entry was posted on Tuesday, February 7th, 2017 at 4:12 pm and is filed under Health care, History, Hoaxes, Malaria, Rachel Carson, Science. You can follow any responses to this entry through the RSS 2.0 feed. You can leave a response, or trackback from your own site.