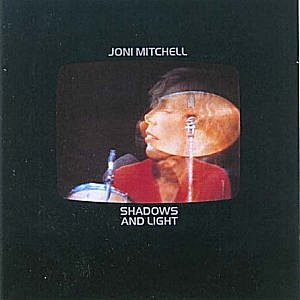 Cover of the vinyl album and CD of “Shadows and Light,” the album produced from Joni Mitchell’s 1980 tour of the same name. Wikipedia image

I think we have this DVD in our collection — surprised no one’s complained to have it taken down.

Joni Mitchell at her jazzy best, voice in peak form (she always is). What’s so amaazing about this tour is the backup band. Don Alias performed percussion. Pat Metheney, the guitar wizard, accepted Joni’s invitation. Michael Brecker went along on saxophone. Brilliant young (then) keyboardist Lyle Mays played.  The sadly, doomed bassist Jaco Pastorious did some of his best work on the tour. Every musician seemed to be at the top of his or her form — and it shows, gloriously.

Go see. Then buy the CD and the DVD of the tour.

We won’t see a tour like this again, probably ever. Joni Mitchell’s health problems are well known. Jaco Pastorious died in 1987 after a descent into mental illness. (Son Kenny introduced us to the great Robert Trujillo-produced film “Jaco” last summer; another one worth watching and listening to.)

But we do have the performance from that one night in 1980, at the Santa Barbara Bowl.

This entry was posted on Sunday, April 23rd, 2017 at 4:54 pm and is filed under History, Music. You can follow any responses to this entry through the RSS 2.0 feed. You can leave a response, or trackback from your own site.