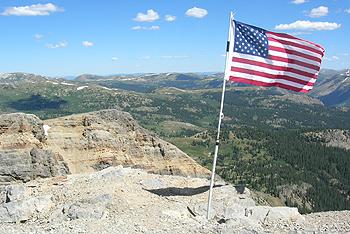 August 1 is Colorado’s statehood day. Unlike many other states, Colorado actually celebrates the day.

More accurately, people of Colorado celebrate the day. It seems most Colorado residents are happy to be there, and take any excuse to celebrate their good fortune.

Under the provisions of the U.S. Flag Code, residents of a state are invited to fly the U.S. flag on their state’s day of statehood. Colorado came into the Union on August 1, at the declaration of President U. S. Grant, in 1876. People of Colorado tend to favor Colorado’s flag for most displays, on Colorado Day.

How are others celebrating? Free admission to Colorado State Parks, for one.

@ICLEI_USA joins in the #congratulations to #ColoradoDay. Thank you State of CO for being a leader that will #ActOnClimate. https://t.co/l240zIKCrd

Proud to be born and raised in #Colorado. Only thing missing from this picture is a mountain man on a snowboard. #ColoradoDay pic.twitter.com/LM08r4A2JW

Happy #ColoradoDay from the land where America The Beautiful was penned. 😎 pic.twitter.com/ep85luc3LG

Happy #ColoradoDay!
We're just a dog and a Subaru away from getting our full membership. https://t.co/7oM9qfk2av pic.twitter.com/6A3zeorcJr

Here I am — under the Balanced Rock @ the Garden of the Gods.

Happy #ColoradoDay we love our state and all of the special places and critters that live here. https://t.co/ULhTZvetqP #NatureColorado pic.twitter.com/hejbBjxkxb

Well, yes, every other state has a statehood day, but don’t look for this effusive outpouring of state pride for many others, including Texas.

Granted it's a beautiful place, but why are they so special? #ColoradoDay Do the other 49 states have their own individual days?

This entry was posted on Tuesday, August 1st, 2017 at 4:29 pm and is filed under Fly your flag today, History, Statehood. You can follow any responses to this entry through the RSS 2.0 feed. You can leave a response, or trackback from your own site.