The 2004 commemorative Iowa quarter-dollar pays homage to Iowa’s great artist son, Grant Wood, and the prairie school house, with a motto for Iowa, “Foundation in Education.” Wood’s painting is “Arbor Day,” showing students and a teacher planting a tree outside a one-room schoolhouse. Image from the Littleton Coin Company.

Iowans fly their flags today in celebration of the anniversary of Iowa statehood.  Iowa’s admission to the Union came on December 28, 1846; Iowa is the 29th state admitted. 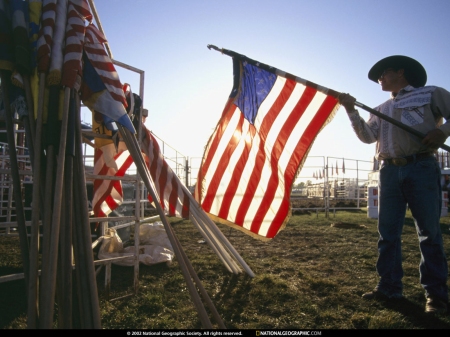 American Flag, Spencer, Iowa, 1996 – caption from the National Geographic Society: A man rolls up U.S. flags at the end of the Clay County Fair in Spencer, Iowa. “Although the population of Spencer is only about 12,000, the fair draws some 300,000 visitors. Once a year, rising from the endless flatness of the Iowa countryside, a crowd forms—to stroll, to hear big country music acts like the Statler Brothers, to sell a grand champion boar, to buy a new silo.” (Photographed on assignment for, but not published in, “County Fairs,” October 1997, National Geographic magazine) Photograph by Randy Olson; copyright National Geographic Society. Just a great photo.

This entry was posted on Thursday, December 28th, 2017 at 2:15 pm and is filed under Flag etiquette, Fly your flag today, History, Lesson plans, Statehood. You can follow any responses to this entry through the RSS 2.0 feed. You can leave a response, or trackback from your own site.