Rachel Carson warned us; you thought it was just DDT? 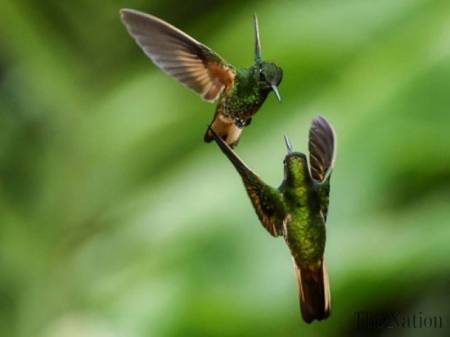 Two hummingbirds in Europe in 2017; will these birds go extinct, soon, due to agricultural use of potent pesticides that kill the insects birds need to live? AFP image via The Nation.

Neonicotinoid Pesticides generally get the blame.

France? You mean where “deja vu” is the native language?

Bird populations across the French countryside have fallen by a third over the last decade and a half, researchers have said.

Dozens of species have seen their numbers decline, in some cases by two-thirds, the scientists said in a pair of studies – one national in scope and the other covering a large agricultural region in central France.

“The situation is catastrophic,” said Benoit Fontaine, a conservation biologist at France’s National Museum of Natural History and co-author of one of the studies.

Some policy makers and scientists appear to have been caught off-guard by the dramatic decline in birds — but anyone watching to environmental news last year probably isn’t surprised. In 2017, scientists and farmers noted the crash of insect populations, the food of the birds.  ‘Where have all the insects gone?’ asked a news story from Science Magazine.

Of the scant records that do exist, many come from amateur naturalists, whether butterfly collectors or bird watchers. Now, a new set of long-term data is coming to light, this time from a dedicated group of mostly amateur entomologists who have tracked insect abundance at more than 100 nature reserves in western Europe since the 1980s.

Over that time the group, the Krefeld Entomological Society, has seen the yearly insect catches fluctuate, as expected. But in 2013 they spotted something alarming. When they returned to one of their earliest trapping sites from 1989, the total mass of their catch had fallen by nearly 80%. Perhaps it was a particularly bad year, they thought, so they set up the traps again in 2014. The numbers were just as low. Through more direct comparisons, the group—which had preserved thousands of samples over 3 decades—found dramatic declines across more than a dozen other sites.

Insect declines were written about in Yale e360, and in news reports from Science. In 2017 scientists and others pondered causes for the decline, with research tending to point at new pesticides used in farming. Severity of the decline was alarming, but few sounded the alarms about birds last year.

Chart showing the decline of insects worldwide, from Yale e360: “According to global monitoring data for 452 species, there has been a 45 percent decline in invertebrate populations over the past 40 years. DIRZO, SCIENCE (2014)”

These events are tragedies predicted by ecologists for years; it’s a replay of the “silent spring” Rachel Carson warned us of in her 1962 book — but the effects are much deeper, and moving much more quickly than almost anyone feared.

Can anyone devise a plan to stop the insect and bird decline, and get it up and operating in time to save Europe’s birds?

What if no one can?

Tip of the old scrub brush to Guardian Environment.

'Catastrophe' as France's bird population collapses due to pesticides https://t.co/JXkufBI5E6

This entry was posted on Wednesday, March 21st, 2018 at 2:45 am and is filed under Biology, Bird Watching, endangered species, Environment, History, Ornithology. You can follow any responses to this entry through the RSS 2.0 feed. You can leave a response, or trackback from your own site.