Most people know Rachel Carson wrote books before Silent Spring. Many libraries have a copy of The Sea Around Us.

But until now it’s been difficult to impossible to get anything else Carson wrote, or said. This unavailability boosts hoaxsters who create false tales about Carson’s intentions and motivations. 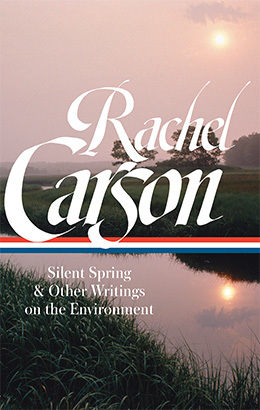 Cover of Rachel Carson: Silent Spring & Other Writings on the Environment, from the Library of America series

Just in time for the annual trotting out of hoaxes around DDT and malaria, for World Malaria Day, April 25.

If I ruled the world and time, I’d go back 20 years and replace President Trump’s bedside books with this one.

And mind you, I’ve not read it yet.

Tip of the old scrub brush to Professor Joanne Freeman.

Below the fold: A description of the volume and its editor, Sandra Steingraber, from Library of America.

of letters, speeches, and essays—most published here for the first time—that reveals the extraordinary courage and insight of its author, Rachel Carson. These writings tell the surprising and inspiring story of how Silent Spring came to be, tracing an arc from Carson’s first inklings of the potential harms of DDT in the 1940s to her resolute public defense of her findings in the face of a concerted disinformation campaign launched by the chemical industry, even as she struggled privately with the cancer that would take her life.

Silent Spring was an unlikely best seller when published in the fall of 1962, a book about the unintended consequences of pesticide use that became the talk of the nation, sparking a revolution in environmental consciousness. Seeing clearly what no one else had in a dauntingly wide-ranging body of technical and scientific evidence, Carson turned a series of discrete findings into a work of enduring literature—one that helped to change the world. In the wake of Silent Spring, public debate and protest led to laws and agencies to protect our air, land, and water, and a new appreciation for what Carson calls “the right of the citizen to be secure in his own home against the intrusions of poisons applied by other persons.”

This deluxe Library of America edition presents the complete text of the first edition of Silent Spring, featuring Lois and Louis Darling’s original illustrations, in conjunction with a selection of Carson’s other writings on the environment, including fascinating correspondence with ornithologists, medical researchers, ecologists, biochemists, and other experts that shows Silent Spring taking shape piece-by-piece, like a puzzle or detective story. As she makes common cause with gardeners, concerned citizens, and grassroots activists to build awareness about environmental degradation, we see Carson emerge as a champion for unbiased science, collective action, and above all reverence for life. In speeches and editorials from the period after the her well-funded critics, exposing industry influence within scientific societies and government policy-making. Other pieces reflect her lifelong love of nature and commitment to conservation, lyrically describing her epiphanies as birdwatcher and beachcomber, her dream of preserving forest land in Maine for future generations, and the joy she took in conveying an outdoor “sense of wonder” to her young adopted son.

An introduction by writer and biologist Sandra Steingraber explores Carson’s life and career, and describes some of the contemporary environmental science for which she blazed a trail. Also included are a 16-page portfolio of photographs, a detailed chronology, and helpful notes.

Sandra Steingraber, editor, is Distinguished Scholar in Residence at Ithaca College; her books include Living Downstream: An Ecologist’s Personal Investigation of Cancer and the Environment (1997), Having Faith: An Ecologist’s Journey to Motherhood (2001), and Raising Elijah: Protecting Our Children in an Age of Environmental Crisis (2011). A cancer survivor and scientist, she is one of America’s leading environmental writers and anti-pollution advocates.

This Library of America series edition is printed on acid-free paper and features Smyth-sewn binding, a full cloth cover, and a ribbon marker.

Rachel Carson: Silent Spring & Other Writings on the Environment is kept in print by a gift to the Guardians of American Letters Fund from The Gould Family Foundation Foundation, which also provided project support for the volume.

This entry was posted on Tuesday, March 27th, 2018 at 5:34 pm and is filed under History. You can follow any responses to this entry through the RSS 2.0 feed. You can leave a response, or trackback from your own site.