Wait. You didn’t fly your flag today because you were waiting for me to tell you to do it?

Oh, you know Congress passed a resolution years ago encouraging flying the flag, even when the President of the U.S. doesn’t issue a formal proclamation, right? 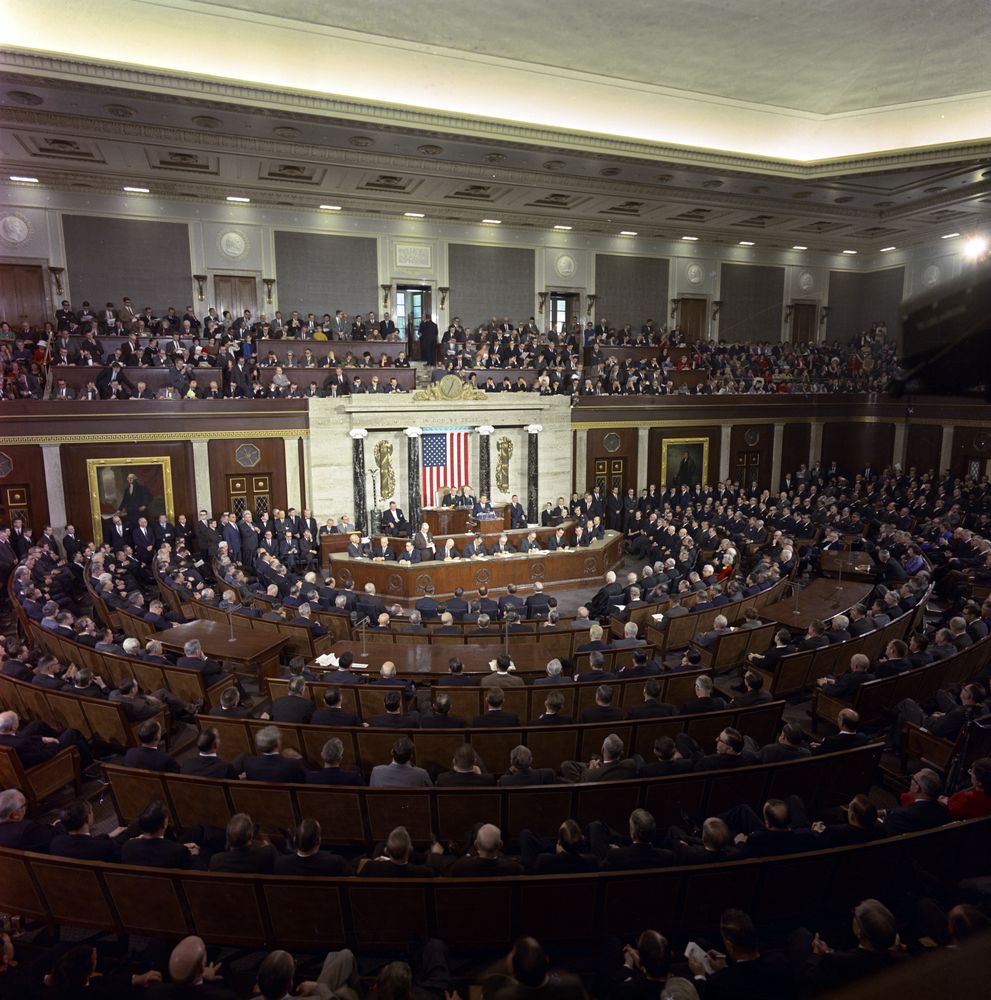 President John F. Kennedy at the 1963 State of the Union Address, in front of the U.S. flag displayed in the chamber of the House of Representatives. Kennedy signed the law designating May 1 as Law Day, in 1961. Photograph by Cecil Stoughton, White House, in the John F. Kennedy Presidential Library and Museum, Boston. Public Domain

On Law Day, we celebrate our Nation’s heritage of liberty, justice, and equality under the law.  This heritage is embodied most powerfully in our Constitution, the longest surviving document of its kind.  The Constitution established a unique structure of government that has ensured to our country the blessings of liberty through law for nearly 229 years.

The Framers of our Constitution created a government with distinct and independent branches — the Legislative, the Executive, and the Judicial — because they recognized the risks of concentrating power in one authority.  As James Madison wrote, “the accumulation of all powers, legislative, executive, and judiciary, in the same hands . . . may justly be pronounced the very definition of tyranny.”  By separating the powers of government into three co-equal branches and giving each branch certain powers to check the others, the Constitution provides a framework in which the rule of law has flourished.

That commitment to the rule of law lives on today.  It drives the debates we see around the country about the growth of the administrative state and regulatory authority, and about the unfortunate trend of district court rulings that exceed traditional limits on the judicial power.  We also see that commitment in the people’s demand that their representatives comply with the Constitution, and in the Representatives and Senators themselves who take seriously their oaths to support and defend the Constitution of the United States.

President Dwight D. Eisenhower first commemorated Law Day in 1958 to celebrate our Nation’s roots in the principles of liberty and guaranteed fundamental rights of individual citizens under the law.  Law Day recognizes that we govern ourselves in accordance with the rule of law rather according to the whims of an elite few or the dictates of collective will.  Through law, we have ensured liberty.  We should not, and do not, take that success for granted.  On this 60th annual observance of Law Day, let us rededicate ourselves to the rule of law as the best means to secure, as the Preamble to our Constitution so wisely states, “the Blessings of Liberty to ourselves and our Posterity.”

NOW, THEREFORE, I, DONALD J. TRUMP, President of the United States of America, in accordance with Public Law 87–20, as amended, do hereby proclaim May 1, 2018, as Law Day, U.S.A.  I urge all Americans, including government officials, to observe this day by reflecting upon the importance of the rule of law in our Nation and displaying the flag of the United States in support of this national observance; and I especially urge the legal profession, the press, and the radio, television, and media industries to promote and to participate in the observance of this day.

IN WITNESS WHEREOF, I have hereunto set my hand this thirtieth day of April, in the year of our Lord two thousand eighteen, and of the Independence of the United States of America the two hundred and forty-second.

This entry was posted on Tuesday, May 1st, 2018 at 6:03 pm and is filed under Flag etiquette, Fly your flag today, History, Law. You can follow any responses to this entry through the RSS 2.0 feed. You can leave a response, or trackback from your own site.

2 Responses to May 1 is Law Day – fly your flags