It’s been 59 years since the youngest state entered the union — the longest stretch in which the U.S. has not added another state.

“On June 14, 1959, Boy Scout Milton Motooka helped get the word out for Hawaii’s statehood plebiscite to be held 13 days later. A new documentary will focus on Hawaii’s statehood.” Hawaiians voted yes in the plebiscite, and statehood was declared two months later. (Whatever became of Scout Motooka? See comments on last year’s post.) 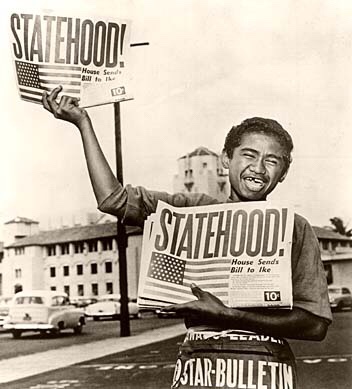 13-year-old paperboy Chester Kahapea happily hawks a commemorative edition of the Honolulu Star-Bulletin with the headline showing the state had achieved statehood after the U.S. House of Representatives passed the law authorizing Hawaii as a state. Star-Bulletin photo by Murray Befeler

Hawaii formally celebrates the day on the third Friday in August, this year on the 19th.  I hope you joined in the festivities (it’s a holiday in Hawaii) — but under the U.S. Flag Code, you may certainly fly your flags on August 21, regardless which day of the week that is. 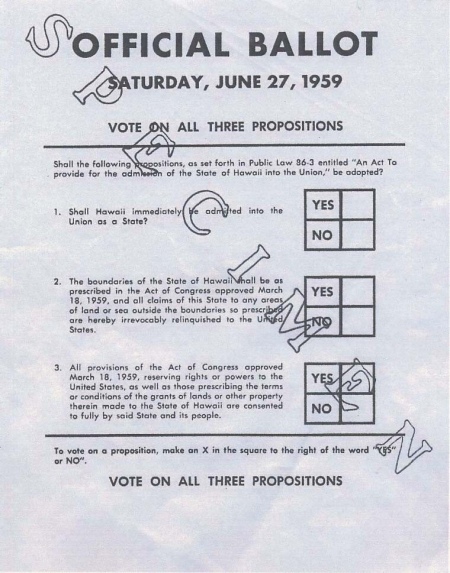 “Loudmouth birthers?” Yeah, Barack Obama, our 45th President, was born in Hawaii in 1961. Some whiners think that, but for statehood, Obama would not have been a citizen eligible to be president. Hawaii is not good ground for growing sour grapes, though. Birth in a territory would probably be enough to make him eligible. Water under the bridge: Hawaii was a state in 1961. President Obama remains president.

This entry was posted on Monday, August 20th, 2018 at 3:41 pm and is filed under Flag etiquette, Fly your flag today, History, State flag, Statehood. You can follow any responses to this entry through the RSS 2.0 feed. You can leave a response, or trackback from your own site.