Rush Limbaugh, and the rest of the story 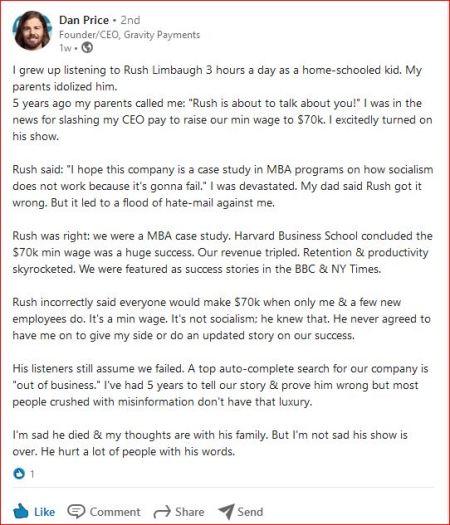 Dan Price on LinkedIn, explaining what Rush Limbaugh got wrong

Too few remember Paul Harvey now. In some ways that’s good — his columns for southern states of the old Confederacy were not the often-cheery dispenser of news and wisdom we heard at noon on ABC’s national radio network. Meaning, I found the columns too often-racist, and too seldom supporting freedom and civil rights. But Harvey hit on a good story-telling format that he marketed as “The Rest of the Story,” and selling hope, he was rarely racist and often informative.

“The Rest of the Story” was a five-minute insert, syndicated by ABC or someone else, often run in the afternoon on AM stations. Harvey would tell about a person who encountered a problem, and describe how the problem was solved and how happy it made people. Something like, ‘As an adopted immigrant child, young Steven didn’t take well to academic settings, coming close to flunking out of schools and finally dropping out of college, though sticking around campus to learn design, a topic the school didn’t have a major in.’ Then there’d be a lot more about things that sounded like failures, until young Steven started tinkering with building computers but got hammered by other computer makers in the market place, though people said they liked his machines. Then one day another worker at his company convinced him to build a phone, even though it was likely Steven would lose big in a market dominated by other legacy companies. But he introduction went well, and someone asked him what they’d call the phone to distinguish it from others. “‘We call it the iPhone,’ Steven said. And now you know the rest of the story.”

Harvey never used the format to criticize or denigrate anyone, which surprised me considering his newspaper columns. I wish someone had used the format recently when Rush Limbaugh died. You hate to say bad things about someone who recently passed; but Limbaugh was a special case. He created anger and division with his radio program, and he profited and reveled in that anger and division.

On LinkedIn, someone posted this story; and it fits the Paul Harvey format so well, and doesn’t really criticize Limbaugh that much.

Dan Price took the astonishing action of slashing executive compensation and dramatically raising pay for workers in his company. It was news for a couple of weeks. During that time critics of equality, like Limbaugh, lambasted Price and his company, and the idea of equity and equality in pay for workers. Then the story fell out of the headlines — except perhaps for snark from critics like Limbaugh.

Rush said: “I hope this company is a case study in MBA programs on how socialism does not work because it’s gonna fail.” I was devastated. My dad said Rush got it wrong. But it led to a flood of hate-mail against me.

Rush was right: we were a MBA case study. Harvard Business School concluded the $70k min wage was a huge success. Our revenue tripled. Retention & productivity skyrocketed. We were featured as success stories in the BBC & NY Times.

Rush incorrectly said everyone would make $70k when only me & a few new employees do. It’s a min wage. It’s not socialism; he knew that. He never agreed to have me on to give my side or do an updated story on our success.

His listeners still assume we failed. A top auto-complete search for our company is “out of business.” I’ve had 5 years to tell our story & prove him wrong but most people crushed with misinformation don’t have that luxury.

I’m sad he died & my thoughts are with his family. But I’m not sad his show is over. He hurt a lot of people with his words.

Price was victimized by Limbaugh. But Price was right, and his company and workers won.

Now you know the rest of the story.

Color movie film of one of the flag raisings surfaced.

Color footage of the flag raising on Mount Suribachi, Iwo Jima, filmed by Sgt. Genaust 76 years ago on this day.

Bill Genaust was reportedly killed in action 9 days later, his remains have not been recovered. #WW2 pic.twitter.com/41N1DSHMbc

So little of the news coverage of World War II is in color, it’s almost shocking to see this and realize it’s not a later re-enactment.
twitter.com/wwiipix/status/1364181702629818372 
Descriptions of the drawing from the National Portrait Gallery only identify the people portrayed above the chess board. It shows Secretary of State John Milton Hay playing against House Speaker Joseph Gurney Cannon, while President Theodore Roosevelt looks on smiling.

It may be quaint today. I have found no description of issues portrayed in the drawing. But it’s a curious collision of now mostly-overlooked history.

NPG lists the drawing by Charles Davis Mitchell as circa 1905. We might presume it to be before July 1, 1905, since that’s the day John Hay died. If 1905, it’s after Roosevelt’s election in November 1904 — whether before or after his March inauguration, we don’t know.

Mitchell was famous for his drawings later, of women, for fashion magazines. We can assume he did other illustrations of political people — but those drawings don’t come up in quick searches.

Joe Cannon is a legendary Speaker of the House, after whom the first House Office Building is named (there are three: Cannon, Longworth and Rayburn). Early in Roosevelt’s first term Cannon complained that Hay had not consulted enough with Congress on foreign policy initiatives, but by 1905 that rankle had largely died down, as I read it.

John Hay may be the most interesting figure in the drawing. Hay was personal secretary to President Abraham Lincoln. He had been active in statecraft and politics after Lincoln’s death, serving in diplomatic posts and supporting James Garfield’s campaign, for example — but Garfield did not offer him a cabinet position, and Hay returned to private life and writing the definitive biography of Lincoln with Lincoln’s other secretary and Hay’s colleague, John George Nicolay. After Garfield’s assassination, Hay was much in the political wilderness for a few years. Hay and Nicolay published ten volumes of the history of Abraham Lincoln in 1890.

Hay returned to government as U.S. Ambassador to Britain, and then as Secretary of State in 1898, in the first administration of William McKinley. McKinley was victim of the third assassination of a U.S. president — Hay and Lincoln’s son Robert share an uncomfortable closeness to the three assassinations. When Theodore Roosevelt succeeded to the presidency in 1901 he kept Hay at State. Hay remained there until his death.

What does the illustration attempt to illuminate? Was this meant as a barbed cartoon, or did it illustrate an article on politics of the time? Details from the National Portrait Gallery do not say.

Delicious mystery. Was this image ever published? Does it have greater historical significance on events of 1905? Was either Hay or Cannon a chess player? Mystery.