This photo doesn’t look like the Joe Rosenthal photo that won the Pulitzer Prize, and then inspired the book and movie, Flags of Our Fathers?

This is the first flag raising on Mt. Suribachi, the highest point of the island that was known then as Iwo Jima. This shows the mean of Easy Company, including Charles Lindberg of Grand Forks, North Dakota, raising a flag they carried on a pipe they found. The photo was taken by Sgt. Lou Lowery of Leatherneck Magazine.

Charles Lindberg, one of the Marines in the photo, died this week. He was 86 years old.

In addition carrying a name made famous by that other guy, the pilot, few people believed him when he said his company raised the flag first on Iwo. He wasn’t in the Rosenthal photo. But Lindberg told the truth.

From his obituary on the Associated Press wire (in The Washington Post):

Three of the men in the first raising never saw their photos. They were among the more than 6,800 U.S. servicemen killed in the five-week battle for the island.

By Mr. Lindberg’s account, his commander ordered the first flag replaced and safeguarded because he worried someone would take it as a souvenir. Mr. Lindberg was back in combat when six men raised the second, larger flag about four hours later.

Rosenthal’s photo of the second flag-raising became one of the most enduring images of the war and the model for the U.S. Marine Corps memorial in Washington.

Rosenthal, who died last year, always denied accusations that he staged the photo, and he never claimed it depicted the first raising of a flag over the island.

Mr. Lindberg was shot through the arm March 1 and evacuated. After his discharge in 1946, Mr. Lindberg went home to Grand Forks, N.D. He moved to Richfield, Minn., in 1951 and became an electrician.

If you’re over 45, if you read James Brady’s Flags of Our Fathers, if you saw the Clint Eastwood movie version, or if you’re a fan of Johnny Cash’s Ballad of Ira Hayes, you know the stories of heroism and sorrow and tragedy that accompany Joe Rosenthal’s photo. As so often happens in history, there is a back story, a bit of a correction — and it has some of the same bittersweet flavors.

Lindberg was 24 years old when his company landed on Iwo Jima. That was 62 years ago. Those who were eyewitnesses are mostly gone. We need to seek out those few remaining, brave survivors, and let them tell what they remember, what they saw, how they felt and how they feel.  Of the twelve men who raised the two flags, Lindberg was the last survivor.  Three of the men from each group died in battle action after raising the flags.

Here’s to the memory of Charles Lindberg, a good American, a good soldier. Thank you, Mr. Lindberg. 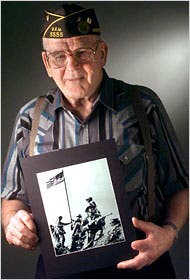 Charles Lindberg holding the photo taken by Sgt. Lou Lowery of Leatherneck Magazine, of the first U.S. flag raising on Iwo Jima, by Easy Company. Lindberg is the soldier standing in back, on the right of the photo. Lowery’s photo was taken about four hours before the second flag raising, captured by Joe Rosenthal, which photo won the Pulitzer Prize. This photo of Lindberg, left, is from 1999, by Associated Press photographer Jackie Lorentz.

Lindberg’s citation for the Silver Star is below the fold.

According to the Associated Press, this is Charles Lindberg’s citation for the Silver Star, awarded for his heroism at Iwo Jima:

The U.S. Navy awarded Charles Lindberg the Silver Star for valor at Iwo Jima in February 1945. Excerpts from the citation:

“Repeatedly exposing himself to hostile grenades and machine-gun fire in order that he might reach and neutralize enemy pillboxes at the base of Mount Suribachi, Corporal Lindberg courageously approached within ten or fifteen yards of the emplacements before discharging his weapon, thereby assuring the annihilation of the enemy and the successful completion of the platoon’s mission.”

“As a member of the first combat patrol to scale Mount Suribachi, he courageously carried his flame thrower up the steep slopes and assisted in destroying the occupants of the many caves found in the rim of the volcano, some of which contained as many as seventy Japanese.”

“While engaged in an attack on hostile cave positions on March 1, he fearlessly exposed himself to accurate enemy fire and was subsequently wounded and evacuated.”

This entry was posted on Tuesday, June 26th, 2007 at 12:24 pm and is filed under Accuracy, Famous Battles, Flag ceremony, Freedom - Political, Geography - Physical, Heroes, History, World War II. You can follow any responses to this entry through the RSS 2.0 feed. You can leave a response, or trackback from your own site.