Let’s put an end to the silly “Christian nation” notion once and for all. Can we?

I am a hopeful person. Of course, I realize that it is highly unlikely we would ever be able to disabuse people of the Christian nation myth.

Okay — then let’s at least lay some facts on the table. 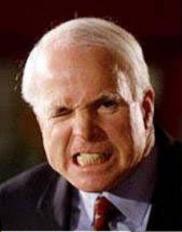 First, some background. John McCain, U.S. Senator from Arizona and candidate for U.S. president, granted an exclusive interview to a reporter from Belief.net. Read excerpts here.

In the interview McCain falls into the Christian nation trap:

Q: A recent poll found that 55 percent of Americans believe the U.S. Constitution establishes a Christian nation. What do you think?
A: I would probably have to say yes, that the Constitution established the United States of America as a Christian nation. But I say that in the broadest sense. The lady that holds her lamp beside the golden door doesn’t say, “I only welcome Christians.” We welcome the poor, the tired, the huddled masses. But when they come here they know that they are in a nation founded on Christian principles.

Then, third, Rod Dreher (the Crunchy Con from the Dallas Morning News) agrees with McCain, mostly.

McCain’s blithe endorsement of this myth, based in error and continued as a political drive to shutting down democratic processes. McCain may be starting to understand some of the difficulties with this issue. His remarks are a week old, at least, and there’s been a wire story a day since then. Will it make him lean more toward taking my advice?

Below the fold, I post a few observations on why we should just forget the entire, foolish claim.

Understand the history: In 1775 the Continental Congress notified the legislatures of the 13 colonies to revamp their charters with an eye toward keeping government going during a period of hostility with England. In each case where religious freedom was not already guaranteed, the colonies disestablished their churches. For some of the Anglican-affiliated colonies this was simple pragmatics, since the Church of England could not be counted on to provide anything during hostility. For others, it was a matter of the general expression of freedom. For some colonies — Rhode Island, Pennsylvania, the Carolinas — their charters already provided religious freedom.

In setting up the Articles of Confederation in 1777, the notion of religion did not appear. The American Revolution was fought and won without a claim that the nation had any religion at all.

After the war, there was no drive to bring back state churches. The trend to religious freedom continued, with one notable exception: In Virginia, Patrick Henry proposed that the state should pay the salaries of preachers, who could double as teachers. Virginians had jailed Baptists and Presbyterians a decade earlier, just for not being Anglican. But when Henry’s proposal got to the legislature, a petition written by James Madison garnered thousands of signatures, and the legislature instead took up Thomas Jefferson’s proposal to pass a statute guaranteeing religious freedom (and freedom from religion) for everybody.

When the issue came up in discussions for the Constitution a year after the Virginia Statute for Religious Freedom, the definitive answer came down in the form of Article VI, which prohibits the use of religious tests for all government offices — and, read it carefully — federal, state and local. When the states ratified the Constitution, none asked for permission to establish a state church, or create a national church (though, in debate a few minority view people complained there was no mention of God in the document); but five states specifically asked for a Bill of Rights including a right to religious freedom.

So, historically, there is no record to support a claim that the founders intended a “Christian” nation in any form.

Advocates of Christian dominionism and others who complain — without foundation, in my view — about “efforts to expunge mentions of God from the public square,” tend to base their claims on a series of “quotes” from “founding fathers.” These quotes typically note the particular founder’s approval of some part of Christianity.

A more careful reading of history, and attention paid to the actual laws the founders wrote, suggest they had a much different view of Christianity. While they approved of morality in general, and while they hoped most people would strive for virtuous action, they recognized that “men are not angels” as Madison put it, and they recognized and tried to prevent abuses of human rights and culture that had been done in the name of Christianity in the past. Specifically they wished to avoid the nation-rending religious strife England experienced, where Catholic sovereigns murdered Anglicans and Protestants, and Anglican monarchs murdered Catholics.

In short, America’s creators strove for a government that featured tools to accommodate any faith, or lack of it, so long as the citizens strove for virtuous action and would debate and discuss the issues.

McCain would do well to spend a little time steeping in this history. It tells a lot about what Americans want, and about how America works.

And, as if on cue, we get this month the publication of a new book by Garry Wills discussing this false idea exactly. Wills has written about the topic before. As America’s leading classicist scholar, Wills’ opinion is worth listening to. In Head and Heart: American Christianities, Wills takes on the notion that America is in any way a Christian nation, and dismisses it, with lots of good stories.

McCain should pay careful attention because this issue shows how America lives up to its ideals and fulfills the promise of America. The reality is that the founders envisioned a nation with much higher moral concepts than most religions endorsed at the time. They thought it abominable that anyone would be jailed for mere thoughts, as occurred in England and the Americas at the time. They ended such jailings.

The founders worked to provide a system where the government had no dog in any religious fight, in order to prevent executions and prosecutions for religious matters. They regarded public policy as something that could be determined by reason rather than revelation from a pulpit. And the fruits of that notion are easily demonstrable:

Christians often endorse these policies once they become popular, or when they become law. Would it be possible to continually increase our actual, practicing morality, in such areas, if we were to officially defer to a faith?

This entry was posted on Friday, October 5th, 2007 at 11:32 am and is filed under 6th Amendment, Bogus history, Books, First Amendment, Politics, Religion, Religious Freedom, Separation of church and state. You can follow any responses to this entry through the RSS 2.0 feed. You can leave a response, or trackback from your own site.