Creationists in Texas claim to have found a stone with footprints of a human and a dinosaur.

No, I’m not kidding. 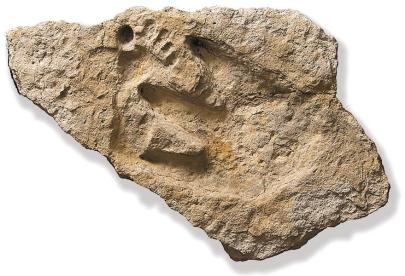 Hoax “dinosaur and human footprints” claimed to be found in the Paluxy River near Glen Rose, Texas.

According to a report in the too-gullible Mineral Wells Index, long-time hoaxster and faux doctorate Carl Baugh’s Creation Evidence Museum announced the rock was found just outside Dinosaur Valley State Park. The area has been the site of more than one creationist hoax since 1960, and was an area rife with hoax dinosaur prints dating back to the 1930s. (See these notes on the warning signs of science hoaxes and history hoaxes.)

The estimated 140-pound stone was recovered in July 2000 from the bank of a creek that feeds the Paluxy River near Glen Rose, Texas, located about 53 miles south of Fort Worth. The find was made just outside Dinosaur Valley State Park, a popular destination for tourists known for its well-preserved dinosaur tracks and other fossils.

The limestone contains two distinct prints – one of a human footprint and one belonging to a dinosaur. The significance of the cement-hard fossil is that it shows the dinosaur print partially over and intersecting the human print.

In other words, the stone’s impressions indicate that the human stepped first, the dinosaur second. If proven genuine, the artifact would provide evidence that man and dinosaur roamed the Earth at the same time, according to those associated with the find and with its safekeeping. It could potentially toss out the window many commonly held scientific theories on evolution and the history of the world.

Except, as you can see, Dear Reader and Viewer, it’s a hoax. No dinosaur has a footprint exactly resembling the print of Fred Flintstone’s pet Dino, as the rock shows; nor do human footprints left in mud look like the print shown.

Dear God, save us from such tom-foolery, please.

To the newspaper’s credit, they consulted with an expert who knows better. The expert gave a conservative, scientific answer, however, when the rock deserved a chorus of derisive hoots:

However, Dr. Phillip Murry, a vertebrate paleontology instructor in the Geoscience department of Tarleton State University at Stephenville, Texas, stated in his response to an interview request: “There has never been a proven association of dinosaur (prints) with human footprints.”

The longtime amateur archeologist who found the fossil thinks that statement is now proven untrue.

“It is unbelievable, that’s what it is,” Alvis Delk, 72, said of what could be not only the find of a lifetime, but of mankind.

Delk is a current Stephenville and former Mineral Wells resident (1950-69) who said he found the rock eight years ago while on a hunt with a friend, James Bishop, also of Stephenville, and friend and current fiancee Elizabeth Harris.

For comparison, real hominid footprints look much different — the print below was left in a thin-layer of volcanic ash about 4 million years ago, 61 million years after dinosaurs went extinct, according to timelines corroborated by geologists, paleontologists, astronomers, nuclear physicists and biologists:

With luck, serious scientists will get a chance to analyze the prints soon, and note that they are hoaxes. If history is any guide, however, Baugh and his comrades will keep the rock from scientific analysis, claiming that scientists refuse to analyze it.

The rock is approximately 30 inches by 24 inches. The human footprint, with a deep big toe impression, measures 11 inches in length. Baugh said the theropod track was made by an Acrocanthosaurus. Baugh said this particular track was likely made by a juvenile Acrocanthosaurus, one he said was probably about 20 feet long, stood about 8 feet tall and walked stooped over, weighing a few tons.

Its tracks common in the Glen Rose area, the Acrocanthosaurus is a dinosaur that many experts believe existed primarily in North America during the mid-Cretaceous Period, approximately 125 million to 100 million years ago.

Baugh said Delk’s discovery casts doubts on that theory. Baugh said he believes both sets of prints were made “within minutes, or no more than hours of each other” about 4,500 years ago, around the time of Noah’s Flood. He said the clay-like material that the human and dinosaur stepped in soon hardened, becoming thick, dense limestone common in North Texas.

He said the human print matches seven others found in the same area, stating the museum has performed excavations since 1982 in the area Baugh has dubbed the “Alvis Delk Cretaceous Footprint” discovery.

This “find” comes as the State Board of Education begins rewriting science standards for Texas schools. The chairman of the SBOE is a committed creationist who publicly says he hopes to get creationism into the standards and textbooks in Texas, miseducating Texas students that creationism has a scientific basis.

Delk’s own daughter, Kristi Delk, is a geology major at Tarleton State University in Stephenville and holds different beliefs from her dad about the creation of Earth and the origins of man.

She said she wants to see data from more tests before jumping to any conclusions.

“I haven’t come to terms with it,” she said. “I am skeptical, actually.”

Listen to your daughter, Mr. Delk.

Gary Hurd at Stones and Bones, who Is a bit of an expert in this stuff, calls “fake.“

Here is how to fake a patina that will look like this fake fossil: Brush the surface with vinegar, and then sprinkle with baking powder followed by baking soda, and let dry. Repeat until you are happy with the results. This is not the only way, or even the best way. But it is simple, and will fool the average fool. Especially easy if they want to be fooled.

So, having spent a little bit more time on the photo of this fake, I feel that I understand a bit more about how it was produced. A legitimate dinosaur track was found and removed. Incompetent, unprofessional “Cleaning” damaged it. An parital overprint, or simple erosion depression was “improved” by adding “toes.” The faked surfaces were smothed over with a simple kitchen concoction to make a “patina.” Artifact fabricators next bury the fake for a year or two, or they smear it with fertilizer and leave it exposed. This helps weather the object and obscure tool marks.

Help stamp out hoaxes; run with the word:

This entry was posted on Tuesday, August 5th, 2008 at 7:09 pm and is filed under Accuracy, Bogus history, Creationism, Education, History, Hoaxes, Public education, Religion, Science, Texas, Texas Citizens for Science. You can follow any responses to this entry through the RSS 2.0 feed. You can leave a response, or trackback from your own site.