The report from last year’s Alma College conference on DDT and human health has been published in .pdf form at Environmental Health Perspectives:  “The Pine River Statement:  Human Health Consequences of DDT Use.”

Carefully?  Check out the pages of references to contemporary studies of human health effects.  Each one of the studies cited is denied by the more wild advocates of DDT use, and each of those studies refutes major parts of the case against DDT restrictions.

Warning sign near the old Velsicol plant where DDT was produced, on the Pine River, Michigan. The 1972 ban on DDT use in the U.S. was prompted by damage to wildlife and domestic animals; a 2009 conference noted that human health effects of DDT are also still of great concern, and perhaps cause alone for continuing the ban on DDT. 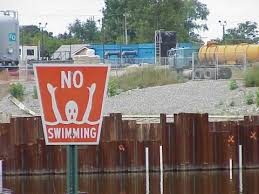 Warning sign near the old Velsicol plant where DDT was produced, on the Pine River, Michigan. The 1972 ban on DDT use in the U.S. was prompted by damage to wildlife and domestic animals; a 2009 conference noted that human health effects of DDT are also still of great concern, and perhaps cause alone for continuing the ban on DDT.

Accurately?  Notice how the conference marks those areas where we do not have good research, such as in the long-term health effects to people who live in the houses that are sprayed with DDT for indoor residual spraying (IRS).  While the conference report cites studies showing elevated DDT levels in the milk of women who live in those homes, they draw no unwarranted conclusions.  Alas, that leaves the field free for Paul Driessen to rush in and claim there are no ill effects — but read the paper for yourself, and you’ll see that’s far from what the research shows.  The paper exposes Steven Milloy’s claims to be almost pure, unadulterated junk science.

Slowly?  Well, it’s been more than a year.

The paper makes one powerful statement that is only implicit:  The claims that DDT is safe, and that use of the stuff should be increased, are wildly inflated.

Objectives: Dichlorodiphenyl trichloroethane (DDT) was used worldwide until the 1970s, when concerns about its toxic effects, its environmental persistence, and its concentration in the food supply led to usage restrictions and prohibitions. In 2001, more than 100 countries signed the Stockholm Convention on Persistent Organic Pollutants (POPs), committing to eliminate the use of 12 POPs of greatest concern. DDT use was however allowed for disease vector control. In 2006, the World Health Organization and the U.S. Agency for International Development endorsed indoor DDT spraying to control malaria. To better inform current policy, we reviewed epidemiologic studies published in the last five years which investigated the human health consequences of DDT and/or DDE exposure.

Data Sources and Extraction: We conducted a PubMed search in October 2008 and retrieved 494 studies.

Data Synthesis: Use restrictions have been successful in lowering human exposure to DDT, however, blood concentration of DDT and DDE are high in countries where DDT is currently being used or was more recently restricted. The recent literature shows a growing body of evidence that exposure to DDT and its breakdown product DDE may be associated with adverse health outcomes such as breast cancer, diabetes, decreased semen quality, spontaneous abortion, and impaired neurodevelopment in children.

Conclusions: Although we provide evidence to suggest that DDT and DDE may pose a risk to human health, we also highlight the lack of knowledge about human exposure and health effects in communities where DDT is currently being sprayed for malaria control. We recommend research to address this gap and to develop safe and effective alternatives to DDT.

Tell other people about this conference report.  This is real science, and it deserves to be spread far and wide.

Tip of the old scrub brush to Ed Lorenz at Alma College, both for providing the news, and for his work to organize the original conference.

This entry was posted on Tuesday, May 5th, 2009 at 6:34 am and is filed under DDT, Disease, Environmental justice, Environmental protection, Health care, Hoaxes, Junk science, Malaria, Rachel Carson, Research, Science. You can follow any responses to this entry through the RSS 2.0 feed. You can leave a response, or trackback from your own site.