Historic irony: On Flag Day in 1943, the U.S. Supreme Court issued its decision in the case of West Virginia vs. Barnette.

Image 1 - Billy Gobitas explained why he would not salute the U.S. flag, November 5, 1935 - Library of Congress collection

The case started earlier, in 1935, when a 10-year-old student in West Virginia, sticking to his Jehovah’s Witness principles, refused to salute the U.S. flag in a state-required pledge of allegiance.  From the Library of Congress:

“I do not salute the flag because I have promised to do the will of God,” wrote ten-year-old Billy Gobitas (1925-1989) to the Minersville, Pennsylvania, school board in 1935. His refusal, and that of his sister Lillian (age twelve), touched off one of several constitutional legal cases delineating the tension between the state’s authority to require respect for national symbols and an individual’s right to freedom of speech and religion.

The Gobitas children attended a public school which, as did most public schools at that time, required all students to salute and pledge allegiance to the flag of the United States. The Gobitas children were members of the Jehovah’s Witnesses, a church that in 1935 believed that the ceremonial saluting of a national flag was a form of idolatry, a violation of the commandment in Exodus 20:4-6 that “thou shalt not make unto thee any graven image, nor bow down to them. . . .” and forbidden as well by John 5:21 and Matthew 22:21. On 22 October 1935, Billy Gobitas acted on this belief and refused to participate in the daily flag and pledge ceremony. The next day Lillian Gobitas did the same. In this letter Billy Gobitas in his own hand explained his reasons to the school board, but on 6 November 1935, the directors of the Minersville School District voted to expel the two children for insubordination.

The Watch Tower Society of the Jehovah’s Witnesses sued on behalf of the children. The decisions of both the United States district court and court of appeals was in favor of the right of the children to refuse to salute. But in 1940 the United States Supreme Court by an eight-to-one vote reversed these lower court decisions and ruled that the government had the authority to compel respect for the flag as a key symbol of national unity. Minersville v. Gobitis [a printer’s error has enshrined a misspelling of the Gobitas name in legal records] was not, however, the last legal word on the subject. In 1943 the Supreme Court by a six-to-three vote in West Virginia State Board of Education v. Barnette, another case involving the Jehovah’s Witnesses, reconsidered its decision in Gobitis and held that the right of free speech guaranteed in the First Amendment to the Constitution denies the government the authority to compel the saluting of the American flag or the recitation of the pledge of allegiance.

There had been strong public reaction against the Gobitis decision, which had been written by Justice Felix Frankfurter (1882-1965). In the court term immediately following the decision, Frankfurter noted in his scrapbook that Justice William O. Douglas (1898-1980) told him that Justice Hugo LaFayette Black (1886-1971) had changed his mind about the Gobitis case. Frankfurter asked, “Has Hugo been re-reading the Constitution during the summer?” Douglas replied, “No–he has been reading the papers.”1 The Library’s William Gobitas Papers showcase the perspective of a litigant, whereas the abstract legal considerations raised by Gobitis and other cases are represented in the papers of numerous Supreme Court justices held by the Manuscript Division.

Supreme Court justices do not often get a chance to reconsider their decisions.  For example, overturning Plessy vs. Ferguson from 1896 took until 1954 in Brown v. Topeka Board of Education. In the flag salute/pledge of allegiance cases Justice Hugo Black had a change of mind, and when a similar case from West Virginia fell on the Court’s doorstep in 1943, the earlier Gobitis decision was reversed.

If there is any fixed star in our constitutional constellation, it is that no official, high or petty, can prescribe what shall be orthodox in politics, nationalism, religion, or other matters of opinion, or force citizens to confess by word or act their faith therein. If there are any circumstances which permit an exception, they do not now occur to us.

Jehovah’s Witnesses, and all other Americans, thereby have the right to refuse to say what they and their faith consider to be a vain oath.

And that, boys and girls, is what the First Amendment means.

Fly your flag today.  This is one of the score of dates upon which Congress suggests we fly our flags.

The photo above drips with history.  Here’s the description from the National Geographic Society site:

The first presidential declaration of Flag Day was 1916, by President Woodrow Wilson.  Wilson won re-election the following November with his pledge to keep America out of World War I, but by April of 1917 he would ask for a declaration of war after Germany resumed torpedoing of U.S. ships.  The photo shows an America dedicated to peace but closer to war than anyone imagined.  Because the suffragettes supported Wilson so strongly, he returned the favor, supporting an amendment to the Constitution to grant women a Constitutional right to vote.  The amendment passed Congress with Wilson’s support and was ratified by the states.

The flags of 1916 should have carried 48 stars.  New Mexico and Arizona were the 47th and 48th states, Arizona joining the union in 1913.  No new states would be added until Alaska and Hawaii in 1959.  That 46-year period marked the longest time the U.S. had gone without adding states, until today.  No new states have been added since Hawaii, more than 49 years ago.  (U.S. history students:  Have ever heard of an essay, “Manifest destiny fulfilled?”)

150 employees of the National Geographic Society marched, and as the proud CEO of any organization, Society founder Gilbert H. Grosvenor wanted a photo of his organization’s contribution to the parade.  Notice that Grosvenor himself is the photographer.

Once upon a time it was a patriotic action to recycle things.

Once upon a time the nation’s future hinged on the ability of Americans to conserve resources and energy sources, especially gasoline.  So Americans, from the president to the lowliest boy, united to urge Americans to recycle rubber, metal, rags and paper.  It was the patriotic thing to do. 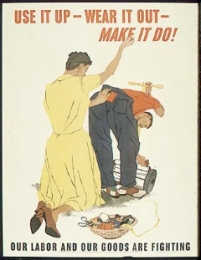 Did the recycling make significant contributions to the resources necessary to win the war?  A few argue that the value of the campaigns was uniting people toward a common goal.  But there were some clear connections between recycling of some products and the resources delivered to soldiers at the front that aided their fighting.

In the Pacific, Japan cut off U.S. access to rubber in Indochina.  Rubber from South America and Africa could be intercepted in shipping by German u-boats.  Metal refining from ores required more energy than refining from scrap.  Although the U.S. entered the war as the world’s leading petroleum exporting nation, gasoline and Diesel fuel supplies were precious for airplanes, tanks and other machines directly supporting the troops.

Recycling was patriotic in every possible meaning of the word.

Is it really a news flash?  Recycling is still the patriotic thing to do.

What the hell?  They’re pro-garbage? Who in the world pays for this campaign Milloy runs, Vladimir Putin?  Vlad the Impaler?