Typewriter of the moment: Theodore Roosevelt at Sagamore Hill

He held many jobs, cowboy, police commissioner, governor, military leader, president — but he regarded his profession as “writer.”

Theodore Roosevelt‘s typewriter, a Remington, from his house at Sagamore Hill, New York: 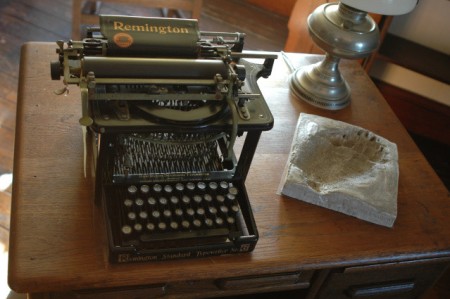 Update, March 16, 2012:  There are two versions of the same photo above, if we’re lucky.  The designator at the National Digital Library has changed at least twice, leaving this post high and dry.  There is another, slightly lower quality version of the photo above.  You’re not seeing double, you’re seeing operational redundancy.

What do you do with an afternoon in Milwaukee before the game?

You tour the Miller Brewing plant.  Free tours, off of State Street (where is Plank Road?).

The gift shop and start of the tour have a good timeline of Miller’s history, which now should be a simple case study in an business history text.  There’s a lot more corporate maneuverings that brewing in Miller’s history.  One guy on the tour seemed unhappy that Miller is South African-owned.

Gotta run.  Maybe a story about the fight at the game later — among the fans, not on the field  (Brewers lost).

The truth about Judge Sotomayor

Nina Totenberg of NPR wins great respect as a reporter on the Supreme Court for a reason:  She’s a great reporter.

As a judge, Sotomayor has ruled in 100 cases that involve questions of racial discrimination of one sort or another. Tom Goldstein, Supreme Court advocate and founder of the leading Supreme Court blog, has read all of those decisions. He says that Sotomayor does not seem to put her thumb on the scale and has in fact, most of the time, ruled against those charging discrimination.

In only 1 of out 8 cases, he says, has she favored in some sense claims of discrimination.

“The fact that she so rarely upholds discrimination claims I think answers the idea that she is always angling for minorities,” he says.

Totenberg on Sotomayor’s statements about judge-made law and policy:

And if the New Haven case is a harbinger in one direction, there are other cases that point the other way too. Sotomayor, for example, dissented when her colleagues allowed the New York City Police Department to fire one of its officers for sending hate mail on his own time. While the hate mail was patently offensive, hateful and insulting, Sotomayor wrote, it did not interfere with the operations of the police department, and, she observed, under our Constitution, even a white bigot has the right to speak his mind.

In another case involving a black couple bumped from an American Airlines international flight, Sotomayor said their race discrimination claim was clearly trumped by an international treaty governing airline rules. It matters not, she said, that her ruling might mean airlines could discriminate on a wholesale basis and that there would be no legal recourse. The treaty’s language is clear and it is not for the courts to make policy, she said, adding that if policy is to be changed, Congress or federal agencies must do it.

White bigots ought to study more and flap less.