Dinosaur and human tracks together! Get yours from eBay!

(I saw “South Pacific” on stage last week.  I have visions of Bloody Mary selling these things.  Much cheaper than a shrunken head, but the shrunken heads are real.) 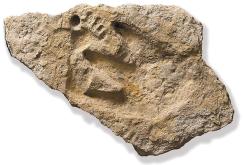 Dinosaur and human tracks offered for sale on eBay, in 10 copies

Compare the track below on the left,  from the news story on the Paluxy hoax, with the track shown on eBay, on the right.

Invite your friends to bid:

This entry was posted on Sunday, January 10th, 2010 at 5:51 pm and is filed under Creationism, Hoaxes, Humor, Rampant stupidity. You can follow any responses to this entry through the RSS 2.0 feed. You can leave a response, or trackback from your own site.

2 Responses to Dinosaur and human tracks together! Get yours from eBay!