Every once in a while a factoid crosses the desk and/or mind of an otherwise badly-informed person who denies global warming is a problem, and without bothering to check the significance of the factoid, the denialist world ramps up The Crazy Rant.

And so, Steve Goddard (who should need no introduction) seized upon a chart that shows a momentary uptick in water in drought-ravaged Lake Powell.  Ignoring more than 50 years of history of the river flows, Goddard pronounced the case for global warming dead.

Goddard’s claim is a grand example of the triumph of ignorance over experience, science, data, history and the law, in discussions of climate change.

Did Goddard read his own chart?  It shows a decline in lake level from 2010. 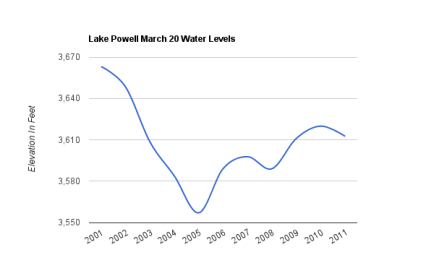 The U.S. Bureau of Reclamation isn’t as optimistic as the warming deniers, noting that drought conditions continue on the Colorado Plateau.

The Climate Prediction Center outlook (dated March 17, 2010) for temperature over the next 3 months indicates that temperatures in the Upper Colorado River Basin are expected to be above average while precipitation over the next 3 months is projected to be near average in the northern reaches of the basin while below average in the southern reaches of the basin.

The Upper Colorado River Basin continues to experience a protracted multi-year drought.  Since 1999, inflow to Lake Powell has been below average in every year except water years 2005 and 2008.  In the summer of 1999, Lake Powell was close to full with reservoir storage at 23.5 million acre-feet, or 97 percent of capacity.  During the next 5 years (2000 through 2004) unregulated inflow to Lake Powell was well below average.  This resulted in Lake Powell storage decreasing during this period to 8.0 million acre-feet (33 percent of capacity) which occurred on April 8, 2005.  During 2005, 2008 and 2009, drought conditions eased somewhat with near or above average inflow conditions and net gains in storage to Lake Powell.  2011 will be another above average inflow year so drought conditions are easing somewhat in the Colorado River Basin. As of April 18, 2011 the storage in Lake Powell was approximately 12.73 million acre-feet (52.3 % of capacity) which is below desired levels.  The overall reservoir storage in the Colorado River Basin as of April 18, 2011 is approximately 31.40 million acre-feet (52.8 % of capacity).
Updated: April 19, 2011

Goddard isn’t the first denier to stumble down this path — but can’t they learn from the stumblings of others?  Remember Australia’s “Jo Nova,” who used a photograph of drought-stricken Glen Canyon Dam and environs to claim that warming was not posing problems?  Remember Anthony Watts claiming Lake Powell as a “good proxy” for water in the entire area, and seizing on a momentary uptick?  (Oh, yeah — Watts based his glee on a Goddard note — even repeating Goddard’s error that Lake Powell’s low levels were due to increased use of water in Los Angeles . . .)

Oy.  Do they ever learn?

The sources from my earlier post on Lake Powell still edify those who bother to read them:

This entry was posted on Wednesday, April 20th, 2011 at 4:48 am and is filed under Climate change, climate_change, History, Politics, Rivers, Science, War on Science, Water. You can follow any responses to this entry through the RSS 2.0 feed. You can leave a response, or trackback from your own site.