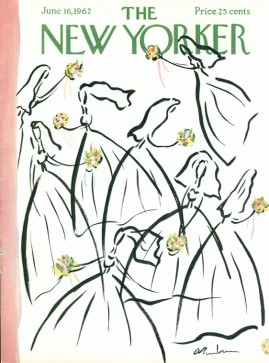 Cover of New Yorker Magazine, June 16, 1962 — the issue which carried the first of four parts of Rachel Carson’s Silent Spring.

What a difference five decades make!

Contrary to the history of history-turning books, the controversy over Silent Spring grows stronger in the last decade.  Upton Sinclair‘s fictional works on Chicago meat packing company misdeeds gets lionized in high school history courses.  Thomas Malthus‘s work on population growth crops up in economics texts.  Adam Smith shows up on ties.  Few read Uncle Tom’s Cabin, but no one defends slavery nor calls Harriet Beecher Stowe‘s book inaccurate even though it was a work of fiction.

In contrast, the attacks on Carson and Silent Spring grow more shrill — today’s Google searches find many more listings for scathing and wildly inaccurate critiques of the book than there are tributes to either.

Carson and her book deserve the praise most often denied, and they deserve little if any of the criticism.  Fifty years on Silent Spring’s influence is almost universally positive.

Rachel was right.  Careful research, care in writing forged by years of research and writing about research, gave Carson the voice and the research chops to write a readable, scientifically accurate call to action.

That call still sounds today, even if one must strain to hear it over the chorus of ill-informed or ill-intentioned hecklers.

This entry was posted on Saturday, June 16th, 2012 at 3:07 pm and is filed under Books, DDT, History, Literature, Malaria, Rachel Carson, Science, Turning Points. You can follow any responses to this entry through the RSS 2.0 feed. You can leave a response, or trackback from your own site.