We took a few hours at the State Fair of Texas a few days ago.

Today comes the sad news that Big Tex, the symbol of the Fair, burned to his metal bones. 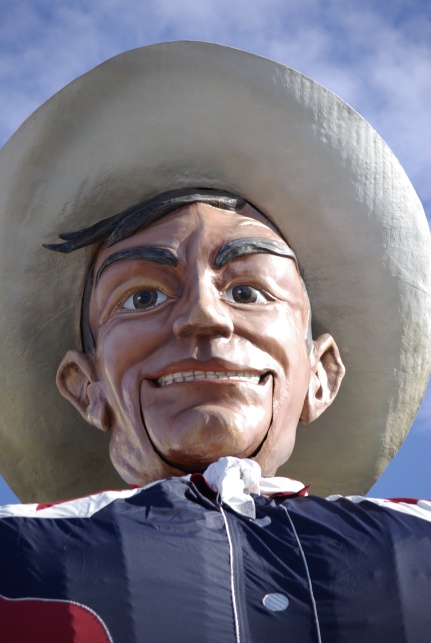 Big Tex at 60, earlier this week, catching sun on a good Fair day.

It was more of an unposed photo, as Kathryn and James read about the landscaping and the use of large, unsculpted Oklahoma stone in the garden at his feet.

Big Tex looked fine — if we’d thought his 60 years showed at all, I’d have worked to get the focus just right, and get more of Tex in the photo.

Later that evening I thought the Dracula lighting might show a bit of his years.  Maybe it was just the lighting, though.  It had been a long day, and it was less than a week before the end of his 2012 run. 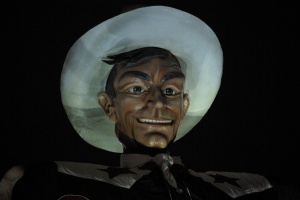 Tex had always been a popular stop, one place everyone knew.  The family safety plan always included Big Tex.  “Where do I go if we get separated.”  “We’ll meet at Big Tex.”  Heck, even after the advent of cell phones, Big Tex was a popular meet-up-after-the-fair-day location.

They say your arteries, veins and nerves get worn after a good life.  Big Tex had some electronics in him, and electrical motors, to operate his jaw and to allow an announcer (in a booth on the ground) to play the Voice of Big Tex, offering a Texas “Howdy, Folks!” to people coming in to the Fair for the first, or 100th time.  One of those pieces of wire seems to have crossed another one this morning, some time after 8:00 a.m., just as the Fair opened for it’s last Friday of 2012 (the Fair closes Sunday).

There was a spark.  And then, he was gone.

Big Tex on fire, photo by John McKibbin via DallasNews.com

Quote of the moment: Harlan Ellison, the two most common elements

The two most common elements in the universe are hydrogen and stupidity.

Harlan Ellison, as noted by Wikiquote:

Introduction to Blast Off : Rockets, Robots, Ray Guns, and Rarities from the Golden Age of Space Toys (2001) by S. Mark Young, Steve Duin, Mike Richardson, p. 6; the quote on hydrogen and stupidity is said to have originated with an essay of his in the 1960s, and is often misattributed to Frank Zappa, who made similar remarks in The Real Frank Zappa Book (1989): “Some scientists claim that hydrogen, because it is so plentiful, is the basic building block of the universe. I dispute that. I say there is more stupidity than hydrogen, and that is the basic building block of the universe.”

For years I’ve found this quote attributed to Albert Einstein, occasionally to Frank Zappa, sometimes to Wolfgang Pauli, once to Richard Feynman, and to several other nuclear or particle physicists or cosmologists or astronomers.  I’ve tried to track it down without success that I considered close enough to wager on.  Recently someone mentioned that he thought he recalled it being said first by Harlan Ellison, and of course, that checks out.

How many other nuggets of Ellison’s wisdom and insightful humor get attributed to other sources?

Zappa probably read Ellison.  Einstein would have wished he’d said it, as would Feynman (who probably also read Ellison); but please remember to attribute it to Ellison next time you use it.  Please be sure to quote him accurately, with “elements,” and not “things.”

You may have plenty of cause to use that quote in the next few weeks.