It was some time ago, but a lot of people appear not to have noticed. 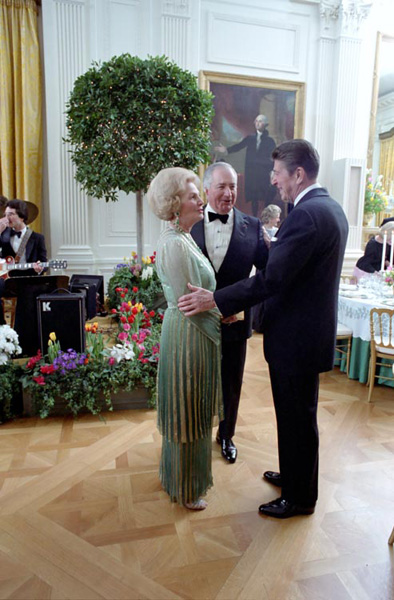 President Reagan talking to Leonore Annenberg and Walter Annenberg at the President’s birthday party in the East Room, February 6, 1981. Photo from the Ronald Reagan Library

FactCheck.org, the group at the University of Pennsylvania that checks the accuracy of political ads and political statements, made a disclosure of its political leanings — in a post way back in 2009.

President Reagan, in 1981, spent all or part of 42 days away from the White House “on vacation” at his home in Santa Barbara, Calif, according to Knoller. President Reagan and his wife, Nancy, also spent three or four days around New Year’s Day each year in Palm Springs, Calif., at the home of philanthropist Walter Annenberg. (In 1993 the late Mr. Annenberg founded the nonpartisan Annenberg Public Policy Center of the University of Pennsylvania, which is FactCheck.org’s parent organization.)

So there you have it, in FactCheck’s own words — they’re connected to Ronald Reagan through Walter Annenberg.

So, the next time someone tells you FactCheck.org is founded and run by “libruls,” send ’em here to see the real photographic evidence. This entry was posted on Sunday, December 23rd, 2012 at 10:41 pm and is filed under Accuracy, History, Humor, Politics. You can follow any responses to this entry through the RSS 2.0 feed. You can leave a response, or trackback from your own site.