M.A.S.H. quote of the moment: War is worse than hell 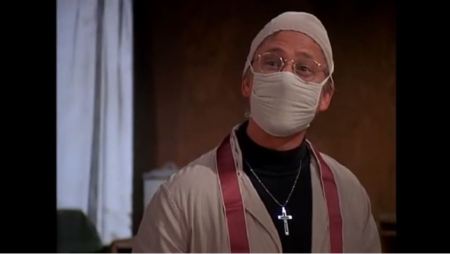 “How do you figure that, Hawkeye?” Father Mulcahy, screen capture from video snippet of M.A.S.H.

Our correspondents Jameses, Stanley and Kessler, alerted me months ago to this exchange in the old television show, “M.A.S.H.” In a discussion of the First Battle of Bull Run, we discussed war as hell.

War is worse than hell, they said. Still true.

Hawkeye: War isn’t Hell. War is war, and Hell is Hell. And of the two, war is a lot worse.

Father Mulcahy: How do you figure that, Hawkeye?

Hawkeye: Easy, Father. Tell me, who goes to Hell?

Hawkeye: Exactly. There are no innocent bystanders in Hell. War is chock full of them — little kids, cripples, old ladies. In fact, except for some of the brass, almost everybody involved is an innocent bystander.

This entry was posted on Monday, May 22nd, 2017 at 1:40 pm and is filed under Famous quotes, History, korean war, Quotes, War. You can follow any responses to this entry through the RSS 2.0 feed. You can leave a response, or trackback from your own site.

3 Responses to M.A.S.H. quote of the moment: War is worse than hell