It was last April.  Kathryn’s garden near the patio needed some work, and of course there are all the plants in pots, including the orange tree (which has since been joined by a pomegranate).

Birds visit often — we hang three or four birdfeeders.  Cardinals, house finches, the Carolina wren and her family, and a lot of white-winged doves commonly hang around.

Of a sudden a flutter of wings — and there he was: 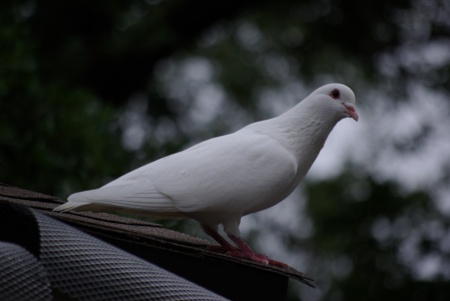 Where did this dove come from? For a few weeks in the spring, it haunted our yard.

We assumed it was male, but we have no way of knowing for sure.  At one point it seemed to make mating advances on some of the white-winged doves — but who knows.

The bird followed Kathryn around.  It ignored the feeders farther out in the yard, and concentrated on the feeders on the patio.  Then it would land on our patio table and watch.

Sometimes it splashed in the birdbaths. 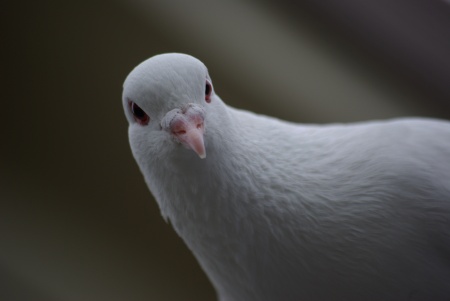 The bird appeared at ease around people. It would watch us work or play in the back yard.

Difficult to miss — the white was positively glowing.  When it flew in, it’s path suggested it came from a house up the alley a ways.  Was it a refugee from some cote, an escapee?  Or was it a trained bird just out for exercise?

A few times it arrived in the morning, and hung around for an hour or two.    Its usual pattern was to arrive in the early evening, grab a few seeds, do a lot of watching, and disappear.

With its color, we feared it would be a target for hawks. 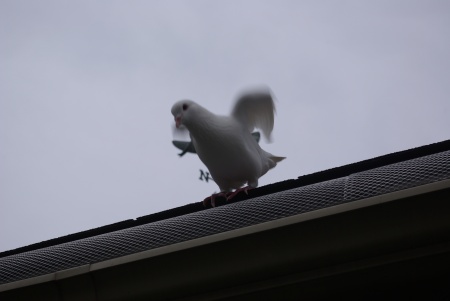 Where it flew to roost, we couldn’t determine.

One day it flew off, and didn’t return.