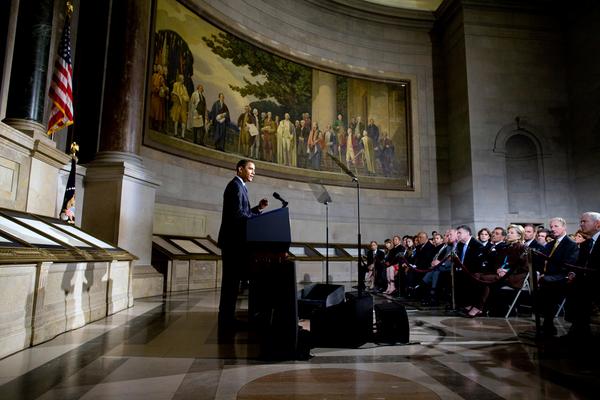 President Barack Obama literally standing with the Constitution, at the National Archives. (source of photo?)

Your flag is up. You’ve already read the Constitution and all 27 amendments.

Time to pass on greetings to others:  Happy Constitution Day!

From the President of the United States:

Eleven years after a small band of patriots declared the independence of our new Nation, our Framers set out to refine the promise of liberty and codify the principles of our Republic.  Though the topics were contentious and the debate fierce, the delegates’ shared ideals and commitment to a more perfect Union yielded compromise.  Signed on September 17, 1787, our Constitution enshrined — in parchment and in the heart of our young country — the foundation of justice, equality, dignity, and fairness, and became the cornerstone of the world’s oldest constitutional democracy.

For more than two centuries, our founding charter has guided our progress and defined us as a people.  It has endured as a society of farmers and merchants advanced to form the most dynamic economy on earth; as a small army of militias grew to the finest military the world has ever known; and as a Nation of 13 original States expanded to 50, from sea to shining sea.  Our Founders could not have foreseen the challenges our country has faced, but they crafted an extraordinary document.  It allowed for protest and new ideas that would broaden democracy’s reach.  And it stood the test of a civil war, after which it provided the framework to usher in a new birth of freedom through the 13th, 14th, and 15th Amendments.

America’s revolutionary experiment in democracy has, from its first moments, been a beacon of hope and opportunity for people around the world, inspiring some to call for freedom in their own land and others to seek the blessings of liberty in ours.  The United States has always been a nation of immigrants.  We are strengthened by our diversity and united by our fidelity to a set of tenets.  We know it is not only our bloodlines or an accident of birth that make us Americans.  It is our firm belief that out of many we are one; that we are united by our convictions and our unalienable rights.  Each year on Citizenship Day, we recognize our newest citizens whose journeys have been made possible by our founding documents and whose contributions have given meaning to our charter’s simple words.

Our Constitution reflects the values we cherish as a people and the ideals we strive for as a society.  It secures the privileges we enjoy as citizens, but also demands participation, responsibility, and service to our country and to one another.  As we celebrate our Nation’s strong and durable framework, we are reminded that our work is never truly done.  Let us renew our commitment to these sacred principles and resolve to advance their spirit in our time.

In remembrance of the signing of the Constitution and in recognition of the Americans who strive to uphold the duties and responsibilities of citizenship, the Congress, by joint resolution of February 29, 1952 (36 U.S.C. 106), designated September 17 as “Constitution Day and Citizenship Day,” and by joint resolution of August 2, 1956 (36 U.S.C. 108), requested that the President proclaim the week beginning September 17 and ending September 23 of each year as “Constitution Week.”

NOW, THEREFORE, I, BARACK OBAMA, President of the United States of America, do hereby proclaim September 17, 2014, as Constitution Day and Citizenship Day, and September 17 through September 23, 2014, as Constitution Week.  I encourage Federal, State, and local officials, as well as leaders of civic, social, and educational organizations, to conduct ceremonies and programs that bring together community members to reflect on the importance of active citizenship, recognize the enduring strength of our Constitution, and reaffirm our commitment to the rights and obligations of citizenship in this great Nation.

IN WITNESS WHEREOF, I have hereunto set my hand this sixteenth day of September, in the year of our Lord two thousand fourteen, and of the Independence of the United States of America the two hundred and thirty-ninth.

In that case, Happy Constitution Week!

What should we do tomorrow?

This entry was posted on Wednesday, September 17th, 2014 at 12:45 pm and is filed under Freedom - Political, Government, History, Law, President Obama, U.S. Constitution. You can follow any responses to this entry through the RSS 2.0 feed. You can leave a response, or trackback from your own site.