Close one: Turns out Obama’s not the antichrist

In case you were worried:

This is the best Obama correction you will read this weekend. http://t.co/GuGJNooz7m pic.twitter.com/nf6YApPZYw

That appeared in the Lexington Dispatch, in Lexington, North Carolina.  Wish they had that paper at my newsstand.

And, just in case that Tweet goes away, the image: 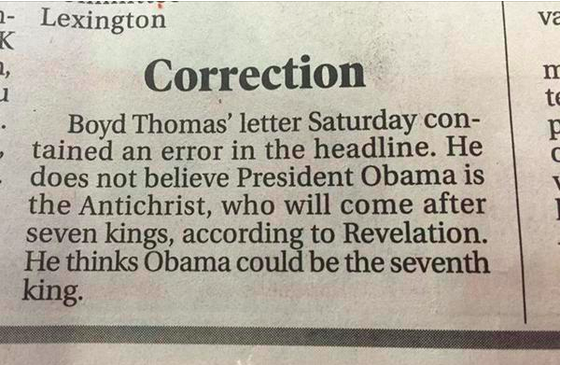 Correction from the Lexington, North Carolina, Dispatch: Obama not the antichrist.

And for the record, Mr. Thomas’s letter, with the corrected title:

Is Obama the seventh king?

Editor: God states that seven kings must come before the rise of the Antichrist. Revelations 17:10 says the seventh king will reign for a short amount of time. Is Barack Obama the seventh king?

Obama has passed laws to kill more innocent people than anyone in the past. Obama’s laws are on abortion and medication allow children to kill children and kill millions of children yearly with our tax dollars. Obama passes his own laws without any laws being enforced in the U.S. Constitution to stop his actions. Obama funds America’s enemies with our money.

Obama’s lifted sanctions off Iran with promises that a peace treaty will be made but does nothing to inspect Iran as they continue to make nuclear weapons. Does Obama already know Iran’s actions and is helping Iran? God says Israel must be attacked by Iran to start a war between all nations before the Antichrist can rise to create a peace treaty between these nations. Everything God said is happening. The Lord can return for God’s children at anytime.

Obama’s releasing terrorists from Gitmo so they can go back to doing the same thing again. Obama won’t call this Islamic terrorism. States also have no-go zones of Islamists teaching their followers how to attack people. Obama believes this is their religious right. This is to come also in these last days. Will this belief be used to create a one-world government?

Radical Islamists show you either follow them or be killed. Christ said only those who remain faithful and endureth until the end are saved. It’s going to be this world’s choice.

Obama has done nothing to help anyone unless it helps him hurt other people. Obama doesn’t want to protect America and nations like Israel. Obama’s given more rights unto the millions of illegal immigrants and anyone entering America than any U.S. citizen. Obama did this to divide America and other nations to make them easier for these terrorists to enter.Who and what is Barack Obama? Obama claims nobody can stop him or change anything he’s done. This evil must come to pass before the Lord’s return and the rise of the Antichrist, but you better know what evil you’re dealing with. Nobody is promised another minute of life upon this earth, and judgment comes at the time of your death.

Many support and stand behind Obama no matter what he does. All these people will stand with Obama in judgment also. Christ promises to spew every lukewarm soul out of his mouth. This means very few will enter heaven, because they show no faith by fighting against the sins of this world daily.

Should Christianity, God’s words or all other beliefs be trusted in these last days? Many Christian beliefs today aren’t God’s words, because they support the sins of this world. No hypocrite will enter heaven.

Also for the record, the answer to the question in the headline, “Is Obama the seventh king?” is, no.

Readers of the Lexington Dispatch wasted no time taking him to task.

This entry was posted on Monday, February 16th, 2015 at 2:28 pm and is filed under Hoaxes, Humor, Newspapers, Politics, Rampant stupidity. You can follow any responses to this entry through the RSS 2.0 feed. You can leave a response, or trackback from your own site.

4 Responses to Close one: Turns out Obama’s not the antichrist