How do Texas’s voter ID laws hurt Texas voters? This film shows how 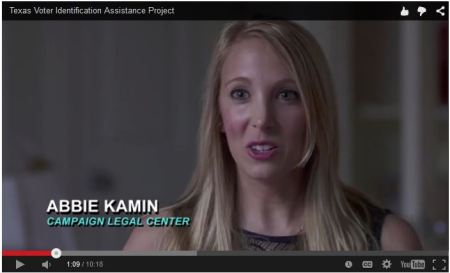 From the Texas Voter Identification Assistance Project, at the Campaign Legal Center.

Under Texas’ new restrictive photo/voter ID law, more than 600,000 Texans now lack sufficient identification to vote in elections, with little to no help from the State of Texas to resolve the problems. The Texas Voter Identification Assistance Project, coordinated by the Campaign Legal Center, a nonpartisan nonprofit, provided assistance to Texas voters who wished to vote but lacked the newly required identification, and thus were disenfranchised.

At the Campaign Legal Center’s site, there’s a press release on the video, released to correspond with arguments on voter identification issues at the Fifth Circuit Court of Appeals.

Today, the Campaign Legal Center released a short film focusing on three lifelong voters disenfranchised by Texas’ voter photo ID law (SB 14), the most restrictive and burdensome voter ID law in the nation.  The ten-minute film produced by Firelight Media traces the efforts of the Campaign Legal Center’s Voter ID Project to assist registered voters to overcome the many hurdles erected by the new law in order to obtain the photo IDs required by SB 14.

Today in Veasey v. Abbott, oral arguments will be heard in a challenge to that law, in the U.S. Court of Appeals for the Fifth Circuit in New Orleans.  Attorneys at the Campaign Legal Center serve as co-counsel for plaintiffs Congressman Marc Veasey, LULAC, and a group of Texas voters.

Following a two-week trial last fall, U.S. District Court Judge Nelva Gonzales Ramos enjoined SB 14, finding that it was as an unconstitutional burden on the right to vote as well as an unconstitutional poll tax, had “an impermissible discriminatory effect against Hispanics and African-Americans, and was imposed with an unconstitutional discriminatory purpose.”  The state defendants immediately appealed Judge Ramos’ decision. In mid-October, the Fifth Circuit Court of Appeals stayed that decision solely to avoid confusion in the November 2014 elections, and the U.S. Supreme Court subsequently refused to vacate the Fifth Circuit’s stay.

The film released today traces the plight of three Texans who were victims of the Texas voter photo ID law and the massive effort required of many voters to exercise their right to vote under the new law.

“These longtime voters were had their voting rights violated because of SB 14 which the District Court found to be unconstitutional and in violation of the Voting Rights Act,” said J. Gerald Hebert, Executive Director of The Campaign Legal Center.  “The plight of these victims, who suffered a violation of their voting rights through no fault of their own, mirrors the evidence that prompted Judge Ramos to strike down Texas’ intentionally discriminatory, modern-day poll tax.”

The first challenge (Veasey v. Perry) to the Texas photo ID law was filed by the Campaign Legal Center and others in the summer of 2013 claiming that SB 14 violates the 1st, 14th, 15th and 24th Amendments to the Constitution, as well as Section 2 of the Voting Rights Act.  Several additional challenges were then brought against the Texas law (including one by the United States).  All of the cases were consolidated in the Southern District of Texas in Corpus Christi.