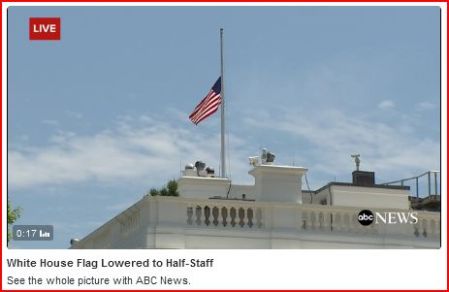 President Obama ordered flags to be flown half-staff until sundown, June 19, 2016, to honor the victims of the attack in Nice on France’s National Day.

HONORING THE VICTIMS OF THE ATTACK IN NICE, FRANCE

IN WITNESS WHEREOF, I have hereunto set my hand this fifteenth day of July, in the year of our Lord two thousand sixteen, and of the Independence of the United States of America the two hundred and forty-first.

U.S. Secretary of State John Kerry is in France on diplomatic business, and offered his condolences directly.

On behalf of U.S., @JohnKerry offers deepest condolences to friends & families of those killed & injured in #Nice. pic.twitter.com/wvF0EROdlO

Flag atop WH lowered to half staff to honor victims of attack in Nice. pic.twitter.com/gcBYd1a3wf

JUST IN: White House flag lowered to half-staff in honor of victims of the #Nice attack. https://t.co/BPFUbxv4JF https://t.co/Ch7WlX1kvp

Here are all of the times Obama has ordered flag flown at half-staff: https://t.co/0ctfNfIQkJ

Italian economist, engineer and political activist Vilfredo Pareto was born on July 15, 1848, in Paris, where his father had fled due to political difficulties.

Pareto should be more famous, for his explanation of the 80/20 rule, and for his contribution to making better things, the Pareto chart.  Many economic texts ignore his work almost completely.  Quality management texts ignore his life, too — generally mentioning the principles they borrow, but offering no explanation.

Vilfredo Pareto, Wikipedia image; why are there so few photographs of the man, who died in 1923?

His contributions, as accounted at Wikipedia:

A few economic rules are based on his work:

And now you, dear reader, having just skimmed the surface of the pool of information on Vilfredo Pareto, know more about the man than 99.99% of the rest of the people on the planet.  Welcome to the tip-top 0.01%.

A mystery I attribute to low readership: I’ve posted much of this information before. In several years, not once has anyone criticized these posts as supporting fascism, the most common mis-directed criticism of Pareto.

Portrait drawing of Vilfredo Pareto, from one of the few photographs of the man available. Image at Alchetron, by Artigas at Deviant Art.