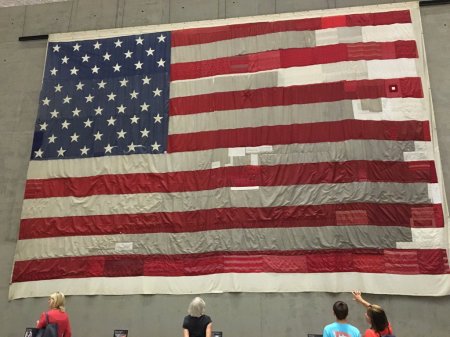 National 9-11 Flag patched up with pieces from many flags, including the flag from Ft. McHenry; displayed at the National 9-11 Memorial Museum in New York City. Photo by Ed Darrel, use with attribution encouraged.

Five days designated by law to fly the U.S. flag in September — only one statehood day, though, for California. In chronological order:

Gold Star Mothers Day will probably get extra attention in this election year.

An American battle flag flew for the first time in battle on September 3, 1777, but this date is usually not commemorated.

This occurred during a Revolutionary War skirmish at Cooch’s Bridge, Delaware. Gen. William Maxwell, commanding a Patriot force of infantry and cavalry, ordered the new flag raised in a clash with an advance guard of British and Hessian troops.

The rebels were defeated and forced to retreat to the encampment housing Gen. George Washington’s main force near Brandywine Creek in Pennsylvania.

Three months beforehand, on June 14, the Continental Congress resolved that “the flag of the United States be 13 alternate stripes red and white” and that “the Union be 13 stars, white in a blue field, representing a new constellation.”

The new national flag, which quickly became known as the “Stars and Stripes,” was based on the “Grand Union” flag – a banner carried by the Continental Army in 1776 that consisted of 13 red and white stripes.

Ten dates to fly the U.S. flag in September; eleven if you’re in California.

September features several other commemorations that usually involve no flag flying (these are declarations for 2015):

This entry was posted on Sunday, September 11th, 2016 at 2:27 am and is filed under Flag etiquette, Fly your flag today, History, U.S. Flag. You can follow any responses to this entry through the RSS 2.0 feed. You can leave a response, or trackback from your own site.