Feel free to use and distribute, though I would appreciate attribution if you do. Handheld iPhone6 video by Ed Darrell.

Update: Here’s a YouTube version, which may be easier for you to copy and embed.

Patriot Day 2016: Fly your flag at half staff today, September 11 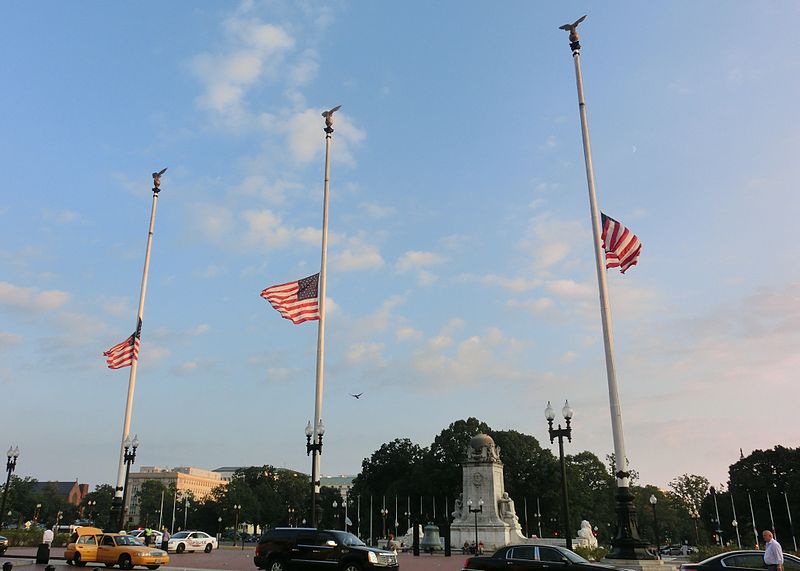 PATRIOT DAY AND NATIONAL DAY OF SERVICE AND REMEMBRANCE, 2016

Fifteen years ago, nearly 3,000 innocent lives men, women, and children who had been going about their normal routines were taken from us, depriving families and loved ones of a lifetime of precious moments. But the acts of terror of September 11, 2001, sought to do more than hurt our people and bring down buildings: They sought to break our spirit and destroy the enduring values that unite us as Americans. In the years that followed, our capacity to love and to hope has guided us forward as we worked to rebuild, more sound and resilient than ever before. With the hearts of those we lost held faithfully in our memories, we reaffirm the unwavering optimism and everlasting strength that brought us together in our darkest hour, and we resolve to give of ourselves in service to others in that same spirit.

The pain inflicted on our Nation on September 11 was felt by people of every race, background, and faith. Though many young Americans have grown up without knowing firsthand the horrors of that day, their lives have been shaped by it. They hear of the many acts of service that occurred coworkers who led others to safety, passengers who stormed a cockpit, and first responders who charged directly into the fire. Many Americans did everything they could to help survivors, from volunteering their time to donating food, clothing, and blood. And many signed up to don our Nation’s uniform to prove to the world that no act of terror could eclipse the strength or character of our country.

United by a common creed, a commitment to lifting up our neighbors, and a belief that we are stronger when we stand by one another, we must find the courage to carry forward the legacy of those who stepped up in our time of need. By devoting ourselves to each other and recognizing that we are a part of something bigger than ourselves just as heroic patriots did on September 11 we are paying tribute to their sacrifices. On this National Day of Service and Remembrance, we must ensure that darkness is no match for the light we shine by engaging in acts of service and charity. I invite all Americans to observe this day with compassionate and selfless deeds that embody the values that define our people, and to visit http://www.Serve.gov to find opportunities to give back to their communities.

America endures in the tenacity of our survivors, and in the dedication of those who keep us safe. Today, we honor all who lost their lives in the heartbreaking attacks of September 11, and all who made the ultimate sacrifice for our country in the years that followed. In memory of these beautiful souls, we vow to keep moving forward. Let us have confidence in the values that make us American, the liberties that make us a beacon to the world, and the unity we sustain every year on this anniversary. Above all, let us stand as strong as ever before and recognize that together, there is nothing we cannot overcome.

IN WITNESS WHEREOF, I have hereunto set my hand this ninth day of September, in the year of our Lord two thousand sixteen, and of the Independence of the United States of America the two hundred and forty-first. 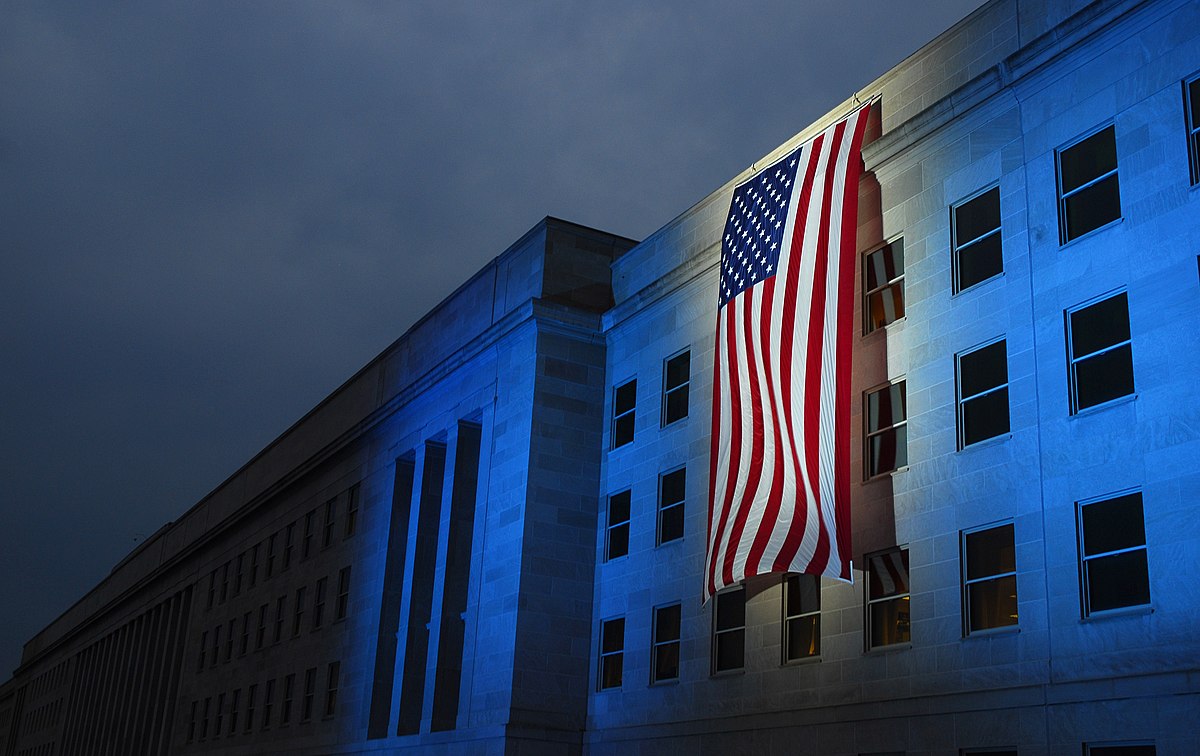 From a photo release from the U.S. Navy in 2007: WASHINGTON (Sept. 11, 2007) – A memorial flag is illuminated near the spot where American Airlines Flight 77 crashed into the Pentagon on Sept. 11, 2001. Secretary of Defense Robert Gates is scheduled to host the Pentagon Sept. 11 Memorial observance for family members of those who were killed in the Sept. 11 attack on the Pentagon. U.S. Navy photo by Mass Communication Specialist 1st Class Brandan W. Schulze (RELEASED)

National 9-11 Flag patched up with pieces from many flags, including the flag from Ft. McHenry; displayed at the National 9-11 Memorial Museum in New York City. Photo by Ed Darrel, use with attribution encouraged.

Five days designated by law to fly the U.S. flag in September — only one statehood day, though, for California. In chronological order:

Gold Star Mothers Day will probably get extra attention in this election year.

An American battle flag flew for the first time in battle on September 3, 1777, but this date is usually not commemorated.

This occurred during a Revolutionary War skirmish at Cooch’s Bridge, Delaware. Gen. William Maxwell, commanding a Patriot force of infantry and cavalry, ordered the new flag raised in a clash with an advance guard of British and Hessian troops.

The rebels were defeated and forced to retreat to the encampment housing Gen. George Washington’s main force near Brandywine Creek in Pennsylvania.

Three months beforehand, on June 14, the Continental Congress resolved that “the flag of the United States be 13 alternate stripes red and white” and that “the Union be 13 stars, white in a blue field, representing a new constellation.”

The new national flag, which quickly became known as the “Stars and Stripes,” was based on the “Grand Union” flag – a banner carried by the Continental Army in 1776 that consisted of 13 red and white stripes.

Ten dates to fly the U.S. flag in September; eleven if you’re in California.

September features several other commemorations that usually involve no flag flying (these are declarations for 2015):