* July 4? But didn’t John Adams say it should be July 2?  And, yes, the staff at Millard Fillmore’s Bathtub sadly noted that, at the Georgetown, Texas, July 4 parade in 2011 pictured at top, it appears no one saluted the U.S. flag as it passed, as the Flag Code recommends. MFB’s been fighting flag etiquette ignorance since 2006. It’s taking much, much longer than we wished. 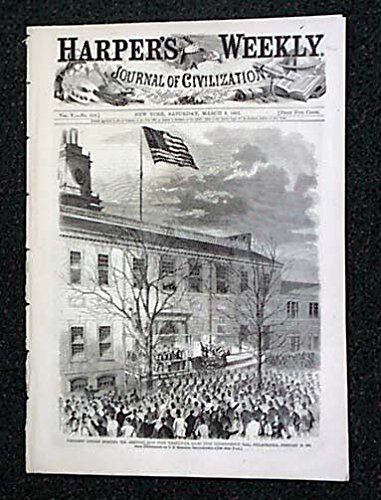 Image of the entire cover of the March 9, 1861, Harper’s Weekly, “A Journal of Civilization.” From a sale at Amazon.com

Yes, this post is a bit late this year.

This entry was posted on Thursday, July 13th, 2017 at 9:50 am and is filed under Flag etiquette, Fly your flag today, History, korean war, Utah. You can follow any responses to this entry through the RSS 2.0 feed. You can leave a response, or trackback from your own site.