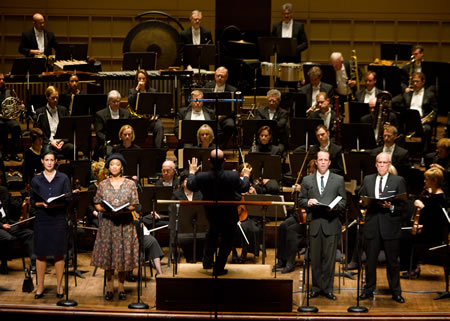 In an era when our president and Congress appear unable to deal with one issue on a good day, it may be instructive to look back to a day upon which one U.S. President handled a lot, all at once.

On August 4, 1964, President Johnson awoke to the news that two U.S. Navy ships cruising in the Tonkin Gulf had been fired upon by North Vietnamese Navy gunboats; then the FBI called and announced that the bodies of three civil rights workers had been found, young men registering African Americans to vote in Mississippi.  Both of these events rumble through history like a Rocky Mountain avalanche to today; either was a make-or-break event for any presidency.

Lyndon Johnson dealt with them both, the same day. And though Vietnam did not turn out for the best, it’s useful to note that Johnson’s call for Congress to grant authority to act on the Tonkin incident got results just three days later.

Sadly we note that Stephen Stucky, the composer of this great piece, died of brain cancer on February 14, 2016.

“August 4, 1964,” is an oratorio covering a remarkable and fantastic coincidence in the presidency of Lyndon B. Johnson.  On that day, the bodies of three civil rights workers who had been missing for nearly seven weeks, were found in shallow graves near Philadelphia, Mississippi — they were the victims of violence aimed at stopping blacks from voting.  The incident was a chief spur to the 1965 Voting Rights Act.

The Dallas Symphony commissioned the work, from composer Steven Stucky and librettist Gene Scheer, in commemoration of President Johnson’s 100th birth anniversary — he would have been 100 on August 27, 2008.  The works were premiered in Dallas in 2008.

The music is outstanding, especially for a modern piece.  The Dallas Symphony played at its flashiest and most sober best, under the baton of new conductor Jaap van Zweden.  It was a spectacular performance.  According to the New York Times:

Mr. van Zweden, hailed in his debut as music director a week before, scored another triumph here. And the orchestra’s assured and gritty performance was rivaled by that of the large Dallas Symphony Chorus, both corporately and individually, in shifting solo snippets charting the course of the fateful day.

The strong cast, mildly amplified, was robustly led by the Johnson of Robert Orth, last heard as another president in John Adams’s “Nixon in China” in Denver in June. Laquita Mitchell and Kelley O’Conner, wearing period hats, were touching as Mrs. Chaney and Mrs. Goodman. Understandably, the taxing role of a high-strung McNamara took a small toll on the tenor of Vale Rideout in his late aria.

The entire thing deserves more commentary, perhaps soon.  There is stellar history in the choral piece.  And there is this:  Consider that Lyndon Johnson, the best legislator and second most-effective executive we ever had as president, got hit with these two crises the same day.  On the one hand the nation got the Voting Rights Act, the Fair Housing Act, executive orders and government support to end segregation and the evils it created.  On the other hand, we got stuck with the disaster of the Vietnam War.

How would the nation fared had a lesser person been in the White House on that day?

(August 4 is a busy, busy day in history; much to think about.)

This entry was posted on Friday, August 4th, 2017 at 1:58 am and is filed under Art, Civil Rights, Desegregation, Government, History, Lyndon B. Johnson, Music, Politics, Vietnam, Voting Rights Act. You can follow any responses to this entry through the RSS 2.0 feed. You can leave a response, or trackback from your own site.