A brief history of Armed Forces Day, and why we fly the flag in 2018 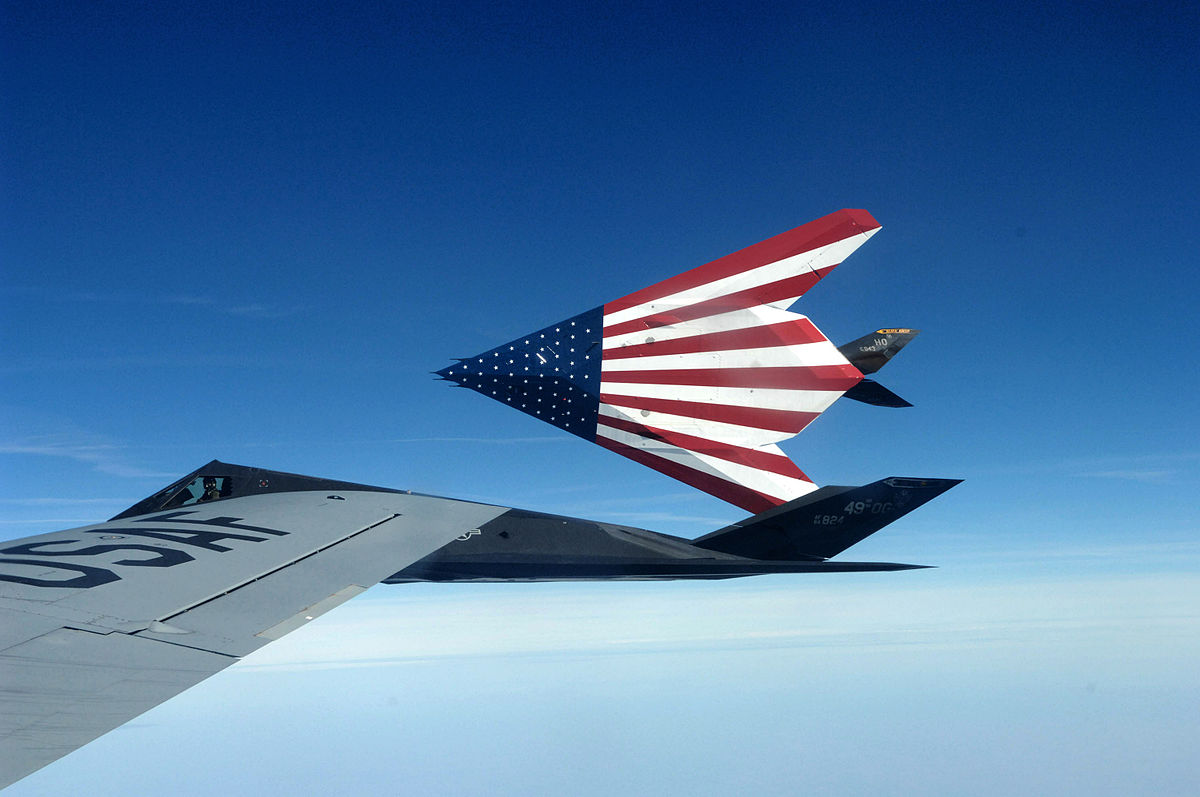 New meaning to “flying the flag”: (Wikipedia caption) A pair of specially painted F-117 Nighthawks fly off from their last refueling by the Ohio National Guard’s 121st Air Refueling Wing. The F-117s were retired March 11 [2008] in a farewell ceremony at Wright-Patterson Air Force Base, Ohio. U.S. Air Force photo/Senior Master Sgt. Kim Frey. This is just a great photo.

Armed Forces Day is the third Saturday in May. This year it falls on May 19.

The U.S. Flag Code designates Armed Forces Day as one day for all Americans to fly their flags, in honor of those men and women presently serving in any of the Armed Forces.

Activities to honor active duty and active reserve forces occur in hundreds of communities across the nation.  Check your local papers.

Remember to fly your flag.

A bit of history, as we’ve noted earlier:  After President Truman’s administration brought the management of the armed forces under the umbrella of one agency, the Department of Defense, Truman moved also to unite what had been a separate day of honor for each of the branches of the military, into one week capped by one day for all uniformed defense services.

On August 31, 1949, Secretary of Defense Louis Johnson announced the creation of an Armed Forces Day to replace separate Army, Navy and Air Force Days. The single-day celebration stemmed from the unification of the Armed Forces under one department — the Department of Defense. Each of the military leagues and orders was asked to drop sponsorship of its specific service day in order to celebrate the newly announced Armed Forces Day. The Army, Navy and Air Force leagues adopted the newly formed day. The Marine Corps League declined to drop support for Marine Corps Day but supports Armed Forces Day, too.

In a speech announcing the formation of the day, President Truman “praised the work of the military services at home and across the seas” and said, “it is vital to the security of the nation and to the establishment of a desirable peace.” In an excerpt from the Presidential Proclamation of Feb. 27, 1950, Mr. Truman stated:

Armed Forces Day, Saturday, May 20, 1950, marks the first combined demonstration by America’s defense team of its progress, under the National Security Act, towards the goal of readiness for any eventuality. It is the first parade of preparedness by the unified forces of our land, sea, and air defense.

Celebrations like Armed Forces Day offer good opportunities to promote history. I suspect that the day’s coming always in the middle of May suppresses some of the teaching moment value, as teachers make a final push for end of course tests, finals, and in high schools, for graduation — and as many colleges are already out for the summer. Good materials are available that can be sprinkled throughout a course.

For example, this list of world-wide events at the first Armed Forces Day, in 1950, gives a good picture of four years into the Cold War, and would make a good warm-up exercise or even an entire lesson, or offer opportunities for projects:

Veterans Day honors veterans of wars, and those who served in the past; Memorial Day honors people who died defending the nation; Armed Forces Day honors those men and women serving today.  Service with two wars, in an “all volunteer” military, is a rough go, especially in times of federal budget cuts.  Say a good word about active duty military on Saturday, will you?

Today and every day, let us celebrate the women and men who make our military the greatest fighting force in the world. #ArmedForcesDay pic.twitter.com/pPemStg603

A GREAT DAY in #SISDFineArts at the Armed Forces Day Parade. Congratulations to all of the members of the #TeamSISD POWER BAND!!! ❤️🇺🇸🎶 pic.twitter.com/nOHTawdF6q

Yes, this is an encore post, mostly. Defeating ignorance takes patience and perseverance.

This entry was posted on Saturday, May 19th, 2018 at 4:27 pm and is filed under Flag etiquette, Fly your flag today, History, Holidays. You can follow any responses to this entry through the RSS 2.0 feed. You can leave a response, or trackback from your own site.