Something about a campfire: Boy Scouts, Order of the Arrow 2018

Another in our series of campfires. 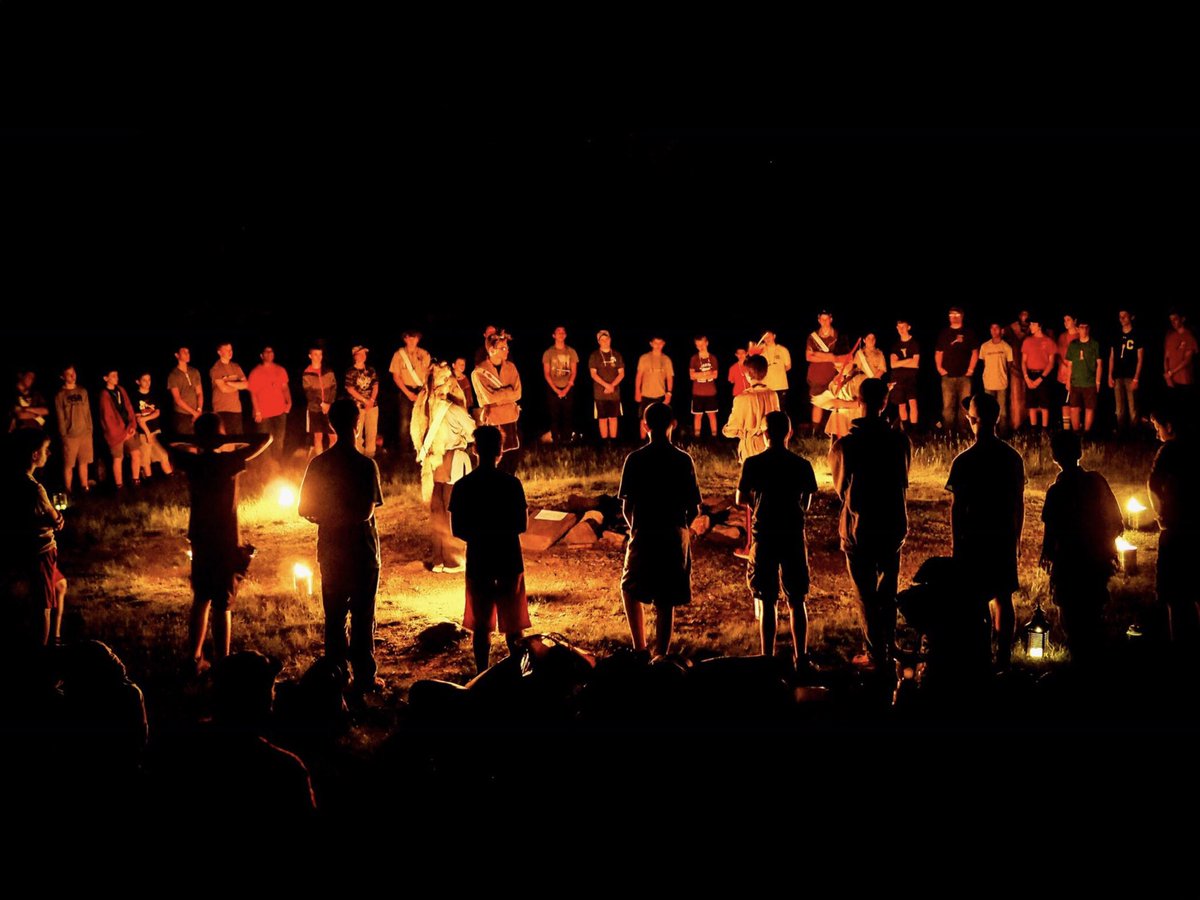 From the Twitter feed of the Order of the Arrow, the Boy Scouts’ honor camper organization; the tweet honored the 103rd anniversary of the service group, in July of 2018. Photographer, location and date not revealed.

No, it didn’t escape me that the campfire itself appears not to be lit. One of the mysteries of the photo.

As might be expected in an organization dedicated much to camping with a good group of boys and men, several organizations sprang up not long after Scouting got a start in the U.S. Carroll A. Edson and E. Urner Goodman initiated the Order of the Arrow (OA) at a summer camp near Philadelphia. The honoring of good campers and good citizenship, and the dedication to service to Scouting had wide appeal, and other councils outside of Philadelphia adopted the practices and program.

In Circle 10 Council BSA, the organization in Dallas, Texas, and surrounding counties, another service group started about the same time, the White Sharks of Takodah. Over time, Texas Scouts and Scouters moved into the national movement of the OA, though the White Sharks traditions continue with a day of work dedicated to improving the council camps annually.

OA members have three levels of membership, Ordeal, Brotherhood and Vigil Honor. Ordeal includes Scouts and Scouters nominated by their Troops, Crews, Ships or other units, who have endured an ordeal that includes a day of service to BSA camps. Brotherhood membership can be obtained with additional service and time. Vigil Honor requires that an Arrowman keep vigil over a campfire for an entire night, a sometimes daunting task in wood-scarce locations, and a trial always just at staying awake.

After two years of exceptional service as a Brotherhood member, and with the approval of the national Order of the Arrow committee, a Scout or Scouter may be recognized with the Vigil Honor for their distinguished contributions to their lodge, the Order of the Arrow, Scouting, or their Scout camp. This honor is bestowed by special selection and is limited to one person for every 50 members registered with the lodge each year.

I learned and practiced building great program campfires as a young Arrowman. My mind goes back to a hundred such great opportunities for camaraderie in and outside the OA, and in and out of Scouting.

There is something about a campfire that puts the soul at ease, and opens it to the glorious brotherhood of fellowship with other people, under a great sky, in the dark.

Tell us about your campfire experiences and memories in comments, please.

Today, we are happily celebrating the 103rd anniversary of the Order of the Arrow! Over a century ago, Caroll A. Edson and E. Urner Goodman started a conversation which has been continued through many Arrowmen all across the world. pic.twitter.com/rs59rj21B8

This entry was posted on Sunday, October 21st, 2018 at 9:02 pm and is filed under Boy Scouts of America, Camping, photography. You can follow any responses to this entry through the RSS 2.0 feed. You can leave a response, or trackback from your own site.