Boy Scouts talk with President Obama in the White House

President Barack Obama shakes hands with a young Cub Scout, during a meeting with representatives from the Boy Scouts, in the Oval Office, July 12, 2010. (Official White House Photo by Pete Souza)

I suspect this was a press release from BSA, which I found at the Cracker Barrel, a blog for Scouting Magazine:

A group of Boy Scouts of America youth members and executive leaders met with President Barack Obama today to discuss top priorities for the organization’s next century of service.

During the White House meeting, the president and the BSA delegation shared their mutual goals for addressing key concerns for our nation’s youth: healthy living, service to the community, and environmental stewardship.

Obama has shown his support for each of these issues by introducing three relevant programs: Let’s Move!, United We Serve, and America’s Great Outdoors.

As has been the case with every U.S. president since William Howard Taft, Obama serves as the Honorary President of the BSA and helps recognize the achievements of more than 50,000 Eagle Scouts each year by signing their Eagle Scout cards.

“Health, community service, and preserving our environment are priorities for all Americans,” Mazzuca said. “Our first 100 years in Scouting taught us the importance of these issues to America’s youth; our next century of Scouting will focus on creating programs to expand our efforts in these areas.”

To show its commitment to these issues and in honor of the BSA’s 100th Anniversary, the organization presented Obama and the first lady, Michelle Obama, with two camperships for Scouts in their home councils. These scholarships will help two Scouts attend summer camp: one each from the Aloha Area and Chicago Area councils.

While at summer camp, these two deserving Scouts will see first-hand how much fun it is to stay active in the outdoors and learn how preserving our environment is critical in today’s world.

The photo came from the White House‘s website, separate from the press release. 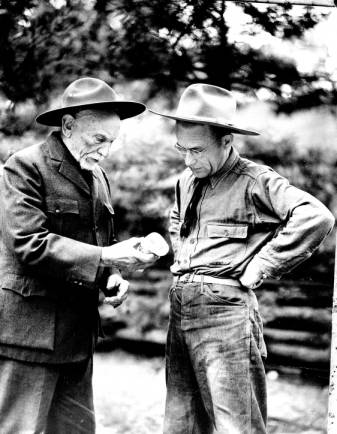 Daniel Carter Beard was best known as an illustrator of children’s adventure books.  He founded a group for boys, the Sons of Daniel Boone, in 1905.  That group was merged into the Boy Scouts of America at BSA’s founding in 1910.

Ed Dodd (November 7, 1902 – May 27, 1991) was an illustrator and cartoonist, probably best known for his comic strip “Mark Trail,” which is still carried in many newspapers today.

According to his listing at Wikipedia:

Ed Dodd went to work for Dan Beard, founder of the Boy Scouts of America, at the age of 16. Dodd worked at Beard’s camp in Pennsylvania for thirteen summers, where he honed his writing and illustration skills under Beard’s guidance. Dodd became a scoutmaster and the first paid Youth and Physical Education Director for the city of Gainesville, Georgia.

Dodd was a Georgian.  This photograph, dated February 14, 1950, shows a meeting of the two illustrators, with Dodd appearing older than the 16 he was when he first met Beard.  The photo is in the collections of the Georgia State University Library, in the Atlanta Area Photographs from the Lane Brothers and Tracy O’Neal Collections.  We might assume it was taken in Georgia, perhaps at Dodd’s “Lost Forest” home and workshop.

We know that can’t be the right date, however, since Dan Beard died in 1941.

Who can shed more light on this bit of history?

Updates:  See comments below — among other things, we know that the February 14, 1950 date was the date that a duplicate negative was made.  Please note in comments if you have further details.

Dodd and others working on “Mark Trail”: The Mark Trail studio was on the second floor of Ed Dodd’s Frank Lloyd Wright-designed home in the Lost Forest at the Atlanta suburb of Sandy Springs, Georgia. At work are (l. to r.) Ed Dodd, Jack Elrod, Tom Hill and Rhett Carmichael. The 130-acre Lost Forest was the model for the fictional Lost Forest National Forest in the strip. Dodd’s house was located on Marsh Creek, a tributary of the Chattahoochee River. Wikimedia photo and caption

Tip of the old scrub brush to Chamblee54, for showing the way to the Georgia State University photographs.

[Editor’s note: Georgia State Library keeps changing the link url on the photograph; if you find a higher resolution version, please, please let us know where it is!]