April 30, 1789: George Washington’s first inauguration as President of the U.S. 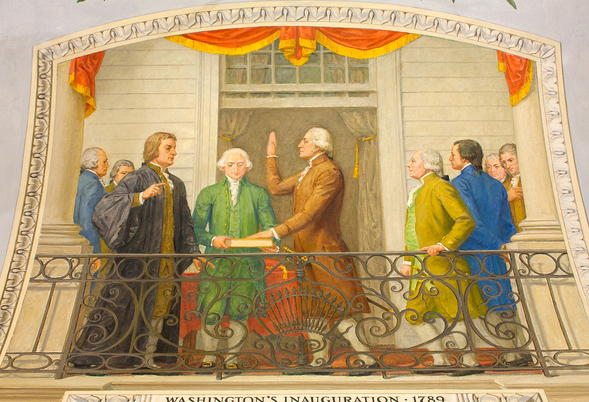 Mural by Allyn Cox in the U.S. Capitol depicts George Washington taking the oath of office in 1789 on the balcony of Federal Hall in New York City. Architect of the Capitol photograph

Not on March 4, as the Constitution specified, because Congress had not been able to organize itself to count the ballots of the electoral college, but on April 30, 1789, George Washington met with the U.S. Senate on the second floor of a building now called Federal Hall; then to the balcony, where Robert Livingston, Chancellor of the State of New York, administered the oath of office to Washington.  Washington put his left hand on a Bible borrowed from St. John’s Masonic Hall — there were no Bibles to be found in Federal hall where the First Congress was meeting.

That’s how it started.

The Library of Congress Today in History feature links to a wealth of resources for scholars and teachers:

Father of Our Country

Detail from Gilbert Stuart’s unfinished portrait of George Washington, from the collections of the Library of Congress.

On April 30, 1789, George Washington delivered his first inaugural address to a joint session of Congress, assembled in Federal Hall in the nation’s new capital, New York City. The newly-elected president delivered the speech in a deep, low voice that betrayed what one observer called “manifest embarrassment.” Washington had not sought the office of president and was humbled by the request to serve.

Aside from recommending constitutional amendments to satisfy citizens demanding a Bill of Rights, Washington confined his address to generalities. He closed by asking for a “divine blessing” on the American people and their elected representatives. In delivering his address, Washington went beyond the constitutional requirement to take an oath of office and thus established a precedent that has been followed since by every elected president.

Two weeks before his inauguration, Washington had made an emotional speech to the citizens of his hometown, Alexandria, Virginia. He expressed regret at leaving his Mount Vernon estate where he had retired, and stated: “no earthly consideration, short of a conviction of duty, could have prevailed upon me to depart from my resolution,’never more to take any share in transactions of a public nature.'” The reluctant leader served two terms in office.