Dispatches from the Culture Wars features a set of comments on an interview right-right-wing pundit John Lofton did with Roy Moore, the former chief justice of Alabama’s Supreme Court who lost his job when he illegally tried to force his religion on the court and on Alabama. This year Moore ran for governor of Alabama, losing in the primary election. 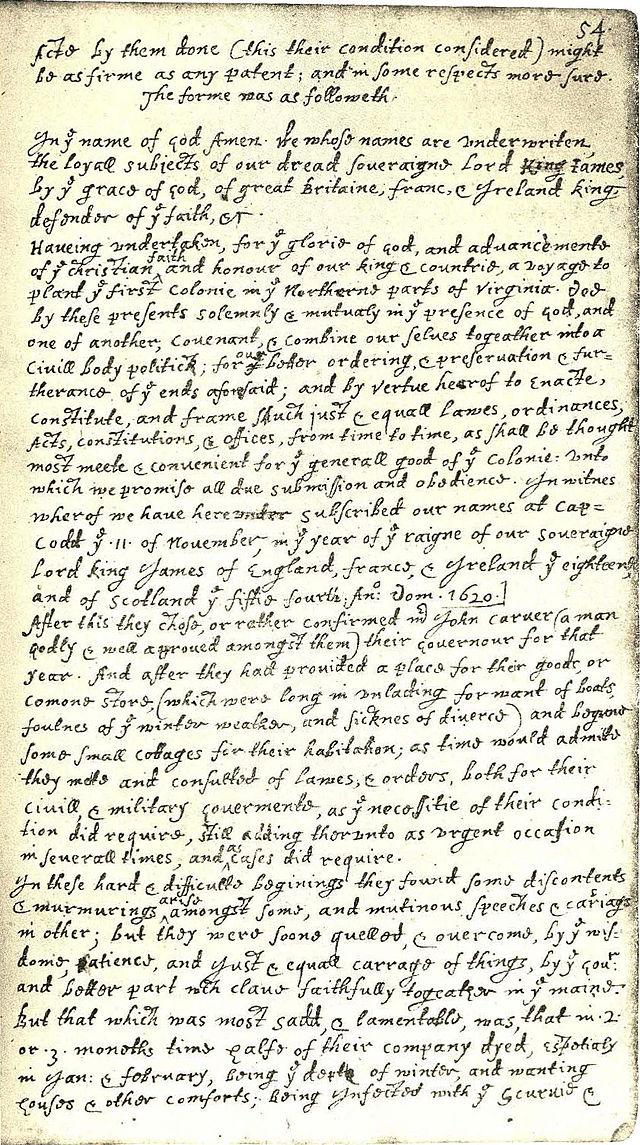 Mayflower Compact. It’s a contract between people. God is a witness, but not a party.

One of the grandest canards in current thought about U.S. history is that the Mayflower Compact set up a theocracy in Massachusetts. Lofton and Moore banter about it as if it were well established fact — or as if, as I suspect, neither of them has looked at the thing in a long time, and that neither of them has ever diagrammed the operative sentence in the thing.

The Mayflower Compact was an agreement between the people in two religiously disparate groups, that among them they would fairly establish a governing body to fairly make laws, and that they would abide by those laws. Quite the opposite of a theocracy, this was the first time Europeans set up in the New World a government by consent of the governed. That is something quite different from a theocracy.I think people get confused by the run-on sentences, and the flattering, intended-to-be-flowery language in the clauses prefacing the meat of the document.

First, a very brief history: There were two groups aboard the ship in 1620, about 70 artisans and craftsman along to provide the real work to make sure the colony made money, and about 30 religious refugees. The London Company (accurately) thought the religious refugees lacking in key skills, like trapping, hunting and hide tanning, and barrel-making (barrels were needed to ship goods to England). So the London Company had insisted the craftsman go along, to make sure somebody knew how to harvest stuff and ship it back.

The London Company had a charter to establish a colony in Virginia. Because of delays with leaky ships and uncooperative winds, the Mayflower got to America late, and much farther north. The Mayflower landed well outside the territory the company was chartered to colonize, and the 70 craftsmen announced they were striking out on their own. Bradford realized his group would freeze, or starve, or both, and at gunpoint he kept both groups aboard ship to work out a compromise.

Here is the full text, from the University of Oklahoma’s College of Law site:

In the name of God, Amen. We, whose names are underwritten, the Loyal Subjects of our dread Sovereign Lord, King James, by the Grace of God, of England, France and Ireland, King, Defender of the Faith, e&.

Having undertaken for the Glory of God, and Advancement of the Christian Faith, and the Honour of our King and Country, a voyage to plant the first colony in the northern parts of Virginia; do by these presents, solemnly and mutually in the Presence of God and one of another, covenant and combine ourselves together into a civil Body Politick, for our better Ordering and Preservation, and Furtherance of the Ends aforesaid; And by Virtue hereof to enact, constitute, and frame, such just and equal Laws, Ordinances, Acts, Constitutions and Offices, from time to time, as shall be thought most meet and convenient for the General good of the Colony; unto which we promise all due submission and obedience.

In Witness whereof we have hereunto subscribed our names at Cape Cod the eleventh of November, in the Reign of our Sovereign Lord, King James of England, France and Ireland, the eighteenth, and of Scotland the fifty-fourth. Anno Domini, 1620.

See what I mean? It’s loaded with clauses that tend to obscure what is going on. Starting out with the standard contract language of the day, “In the name of God, Amen,” it loses modern readers. We tend to think that with so many mentions of God without a “damn” following, it must be a religious document. But it’s not.

Here’s the meat the the document, the money quote:

We, whose names are underwritten . . . do by these presents, solemnly and mutually in the Presence of God and one of another, covenant and combine ourselves together into a civil Body Politick, for our better Ordering and Preservation, and Furtherance of the Ends aforesaid; And by Virtue hereof to enact, constitute, and frame, such just and equal Laws, Ordinances, Acts, Constitutions and Offices, from time to time, as shall be thought most meet and convenient for the General good of the Colony; unto which we promise all due submission and obedience.

Got that? They promised to form a government, enact fair laws, and obey those laws — government by consent of the governed, by mutual compact, not by divine right.

Just because God is mentioned in the document doesn’t change its nature. It’s a secular compact, an agreement between men, outside the stricture of any church, outside any particular belief.

As we noted over at Ed Brayton’s site, Dispatches from the Culture Wars, many New England settlements and towns became little theocracies. But it wasn’t the Mayflower Compact which set that up, or encouraged it.

This entry was posted on Wednesday, July 26th, 2006 at 4:23 am and is filed under America's founding, History Revisionism, Religious Freedom, U.S. Constitution. You can follow any responses to this entry through the RSS 2.0 feed. You can leave a response, or trackback from your own site.

4 Responses to Mayflower catechism, no.