Political cartoons: Powerful if they hit the audience

Here’s one below, a comment on the security wall being built in Israel, that got very little circulation in the west at Christmas time. Can you imagine the impact had this drawing run in newspapers in Europe, the U.S., and Canada?

It’s a mashup of a famous oil painting related to the Christian Nativity, from a London-based artist who goes by the name Banksy. (Warning: Banksy pulls no punches; views shown are quite strong, often very funny, always provocative, generally safe for work unless you work for an authoritarian like Dick Cheney who wants no counter opinions.) 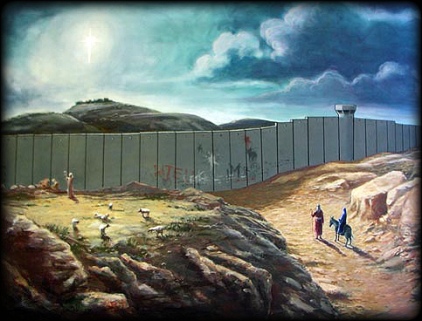 This was the only U.S. flag ever officially to have more than 13 stripes.

Replica of the flag flown during the War of 1812, with 15 stripes and 15 stars. Very few examples of a 15-stripe flag remain. The flag that flew over Ft. McHenry, the original “Star-spangled Banner,” is one. This replica flies in the peace garden in Oswego, New York.

The “Star-spangled Banner” that flew over Ft. McHenry, near Baltimore, which inspired Francis Scott Key to write the poem which was put to music to form our national anthem, had 15 stripes. President James Monroe signed a law in 1818 that specified 13 stripes, with a new star to be added on July 4 of any year after a new state was added, a practice which has held through our current 50-star, 13-stripe flag.

Tennessee was the 16th state. I have been unable to clarify what happened with the number of stripes between Tennessee’s admission to the union on June 1, 1796, and the law passed in the Monroe administration in 1818. Does anyone know? Got links?