Embedding the video from NBC escapes me — but go here to see NBC’s four-minute report on the Obama birth certificate crazies.

Here’s the full video of the BCOs going crazy at a Congressman’s town meeting.

It’s really a form of mass hysteria, isn’t it?

For months the birthers, or Birth Certificate Obsessed (BCOs), have pleaded for mainstream media to take a look at this issue.  NBC did just that.

Is it any surprise that this morning the crazies say “NBC lied?”

BCOs fell hard to the hoax about Obama not being eligible, and now they deny all evidence that they fell for a hoax.

BCOs/birthers?  Can we have our country back, now that you’re done?

Be sure to see earlier material here at Millard Fillmore’s Bathtub:

Here’s a large dose of facts, including David Maraniss’s article in the Washington Post about Obama’s early life.  Note that it describes details that would be impossible to fake, were the story not accurate:

Sometimes the blue jays do all they can to stay out of the sun — like this guy, who was bent on getting some of Kathryn’s weird purple peppers. 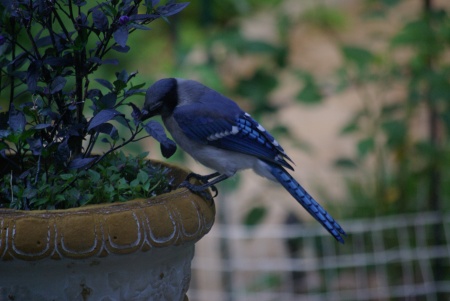 Blue jay working to get a purple pepper

Considering these shots were done in the shade, with just a 200 mm zoom, through a foggy window, they came out pretty well.

Blue Jay wrestles the pepper, or something, from the plant.

The peppers eventually grow to be the size of a Bing cherry — too big for the jays, then.  They go after these peppers before they mature, and after they dry. 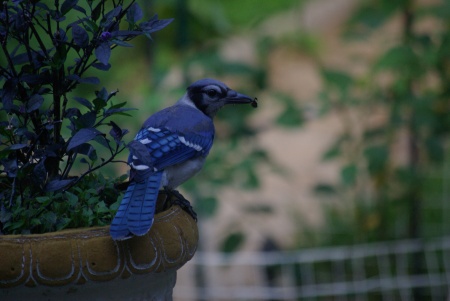 With her prize, the blue jay heads for its dining area in the live oak.

Mary K left us with her old bird feeder when she moved.  This year we’ve kept feeders in both the front and back yards.  Blue jays appear to have recovered from their West Nile devastation three years ago — we had one family nesting in the live oak earlier, in the spring — and Kathryn learned that the jays like peanuts still in the shell.

It’s been a good year for watching birds in our yard.  Still haven’t captured that little green hummer in a camera, though.